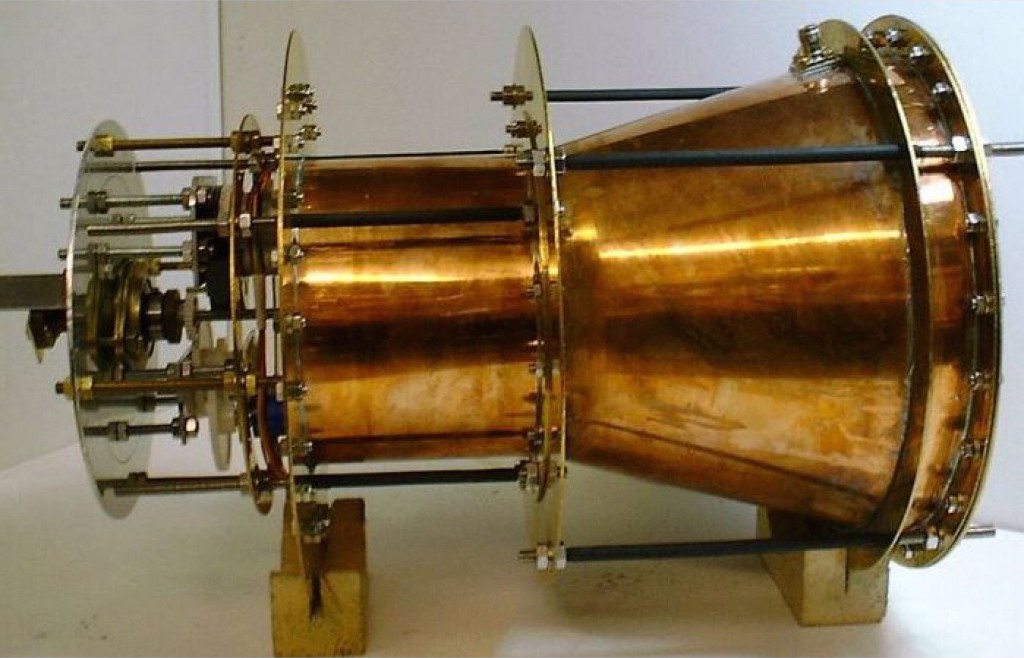 The reactionless thruster known as the EmDrive is back in the news. This time the buzz arises from a new theoretical paper that attempts to explain just how the device can seem to violate basic physics. While this new work begins with some basic quantum physics, it quickly veers into uncharted (and highly speculative) theoretical waters to achieve its goal.

The EmDrive is highly controversial because it is claimed to create a thrust without a corresponding propellant. Such a “reactionless drive” would violate Newton’s third law of motion, which is one of the basic tenets of classical physics. Usually this kind of thing is quickly tossed onto the compost pile of fringe science, but in this case several independent groups have claimed to observe a thrust from this kind of device. While this might seem like solid evidence, there are several reasons to be skeptical. To begin with, none of the work has yet been peer reviewed. It was announced last month that some of the experimental work is currently undergoing peer review, but no peer-reviewed paper has yet appeared. This is important because the supposedly observed thrust are extremely small, and it is notoriously difficult to rule out more mundane causes for these kinds of odd tiny effects. Secondly, if the EmDrive actually works, it would violate known physics. There is currently no theoretical explanation for why such a thrust might occur. While you don’t need a theoretical explanation for a clear experimental result, it would help to have a theoretical model one could test. This new work attempts to create such a theoretical model.

The model begins with an idea out of quantum physics known as the Unruh effect. In quantum theory, empty space can be described as being filled with a quantum field. A vacuum, in this view, is simply the lowest possible energy state for these fields. For an inertial observer (one that isn’t accelerating) this field has effectively zero energy, and empty space looks like a vacuum just as we’d expect. However, for an accelerating observer the field has an observed energy, and the observer would observe a sea of particles in thermal equilibrium. As a result, an accelerating observer would be heated by quantum particles. While this might seem odd, it’s actually a well known effect, and is somewhat similar to Hawking radiation. While the Unruh effect isn’t controversial, it’s never been observed because it is such an extremely tiny effect. An acceleration of a trillion gees would create a temperature of less than a millionth of a Kelvin. The Unruh effect raises an interesting question for accelerating particles, specifically whether an accelerating particle interacting with an Unruh thermal background will emit radiation that can be observed by a non-accelerating observer. This would be known as Unruh radiation, and there are theoretical models both for and against it. While it seems reasonable that Unruh radiation should exist, it’s also reasonable to be skeptical.

In the theoretical model for the EmDrive, it’s assumed that Unruh radiation is real. Furthermore, the author of the model argues that Unruh radiation is the source of inertia. The basic idea is that an accelerating mass would experience a kind of drag due to the Unruh effect, which we describe as the inertial resistance to acceleration seen in classical physics. This effect would be largely indistinguishable from the usual behavior of inertia, but the author argues that subtle differences would show up as anomalies, such as the flyby anomaly seen in some spacecraft. From there it gets even more speculative, because the author claims that photons can also have inertial mass due to the Unruh effect, and thus give the EmDrive a reactionless thrust.

The overall shape of the EmDrive is somewhat conical. As electromagnetic radiation is is bounced around in this conical cavity, the allowed energy levels of photons at the narrow end are slightly different from the allowed energy levels at the wider end. So photons can transition between energy levels within the cavity of the device. In the model, photons at different energy levels have different inertial mass. So when photons transition from higher energy levels at the narrow end to lower energy at the wider end, their inertia changes. By Newton’s third law, there must be a reaction force on the drive itself. In short, this model buries Newton’s third law in quantum speculation. Through this model the EmDrive can defy Newton’s law by thrusting against the vacuum of space rather than violating the law directly.

In its defense the work does at least strive to make clear and testable predictions. Not only does it predict discrete levels of thrust based upon the geometry of the cavity, it also predicts that one should see a reversal of thrust direction given a cavity of certain dimensions. But it also isn’t something to get too excited about. This new work doesn’t prove the effect is real. It does not even agree with claimed results that strongly. The model also raises further theoretical problems, such as requiring that the speed of light changes within the cavity, which would violate the central property of special relativity. Even if the EmDrive works as this model claims, it still violates well tested laws of physics.

In all honesty I’d love to see a device like this actually work, but I’m not convinced the effect is real. While this new work is interesting, it doesn’t make the effect more convincing.

Through The Looking Glass
Sphere of Influence
Cloud Atlas
Does the Aether Exist? Hint: No
Massive Issues
The Great Unknown
Inertia
Looking For Narnia
Higgs Goes the Theory
Is Eris A Brown Dwarf?