An interesting aspect of science history is that you can see how theoretical ideas rise and fall based upon the evidence. Models are proposed, experiments are made disproving them, and then the hammer falls. One such idea is that of the luminiferous Aether.

The idea of an aether arose from the fact that light has properties of a wave. This was shown both theoretically through the unification of electricity and magnetism, and experimentally through the double slit experiment. By the time this was clearly known in the 1800s, it raised a very interesting question: if light is a wave, what does it propagate through? Waves on a pond, for example, propagate through the water. Sound waves propagate through the air. As far as anyone knew at the time, waves needed a material or medium through which they could travel. Surely there must be a medium for light, and this came to be known as the luminiferous aether (named after the “fifth element” of the ancient Greeks).

If the aether actually existed, we should be able to see its effect. If light traveled through a medium, then its observed speed should depend on the speed of the aether relative to us. You can see how this would work with water waves. If you were to drop a stone into a still pond, the waves would spread out evenly in all directions. The speed of the ripples depends upon the water, which would be the inherent speed of the waves. Now suppose you dropped a stone into slowly flowing river. In this case the ripples would spread out as usual, but since the ripples also flow with the river, the ripples in the downstream direction would appear to move more quickly than the ripples in the upstream direction.

The solution to this mystery was eventually found in Einstein’s theory of special relativity, which said there was no aether. Instead light had an absolute speed in all reference frames. While the Michelson-Morley experiment is typically taken as clear evidence the aether doesn’t exist, several other experiments have shown time and again that relativity is right, and the aether model is wrong. As far as mainstream physics is concerned, the aether has been dead for a century.

Despite this seemingly strong evidence, there are still a few fans of aether models. Many argue that these experiments don’t entirely disprove the aether. Perhaps the Earth drags the aether along with it somehow, or perhaps Earth really doesn’t move. In support of the aether they will often hold up an experiment known as the Sagnac effect. 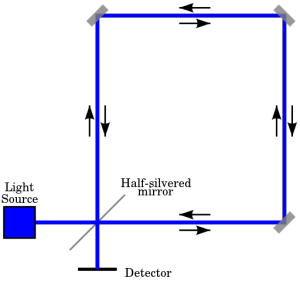 The experiment was first performed by Georges Sagnac in 1913. At the time it was a challenging experiment, with lasers and modern equipment it’s pretty easily done. The basic idea is to take a beam of light and split it so that half the light goes around a path clockwise, and the other half counterclockwise. The two light beams are then combined so that they create an interference pattern. Any shift in the speed of light will then cause a shift in the interference pattern. This is similar to the method Michelson and Morley used. The big difference is that you take the entire apparatus and spin it.

If there really is an aether, then the device must be rotating through it, so there should be an observed shift in the interference pattern. Sure enough, when Sagnac performed this experiment he observed a shift. This experiment has been done countless times in a variety of ways, and the shift is consistently observed. The Sagnac effect is very real.

Sagnac thought this experiment confirmed the existence of the aether, and he’s partly right. A shift in the interference pattern is exactly what the aether model predicts. Sagnac also thought the experiment disproved relativity, and that’s where he’s wrong. A shift in the pattern is also predicted by special relativity, as Max von Laue predicted two years before Sagnac performed his experiment.

What Sagnac failed to understand is that special relativity applies to frames of reference that are not rotating, so it doesn’t predict that light’s trip around the loop is the same in both directions when the device is rotating. If you were to look at the rotating device from above, you’d see that light that travels in the direction of the rotation actually travels a longer distance because the device is rotating away from it a bit. The light going in the opposite direction makes a shorter trip, since the device rotates into it. So relativity also predicts a shift in the interference pattern.

As a result, the Sagnac experiment is inconclusive, since it agrees with both the aether and relativity models. This happens sometimes, and when it does you need a tie-breaker to distinguish one model from another. In this case there are several such experiments, but one very clear one comes from Einstein’s most famous prediction, E = mc2. If relativity is right, then mass and energy must be connected. If Einstein equation fails, then relativity is decidedly wrong. Of course if that were the case, things like nuclear power wouldn’t work, but since lots of people rely upon nuclear power every day, we can declare relativity the winner.

So the only place you’re likely to find aether these days is in one of those Marvel superhero movies.

Paper: Laue, Max von On an Experiment on the Optics of Moving Bodies. Münchener Sitzungsberichte: 405–412 (1911)

On the Edge
Technicolor Dreams
From Atoms To Everything
The Planet That Never Was
Shake, Rattle and Roll
Echoes From The Abyss
How CERN’s Discovery of Exotic Particles May Affect Astrophysics