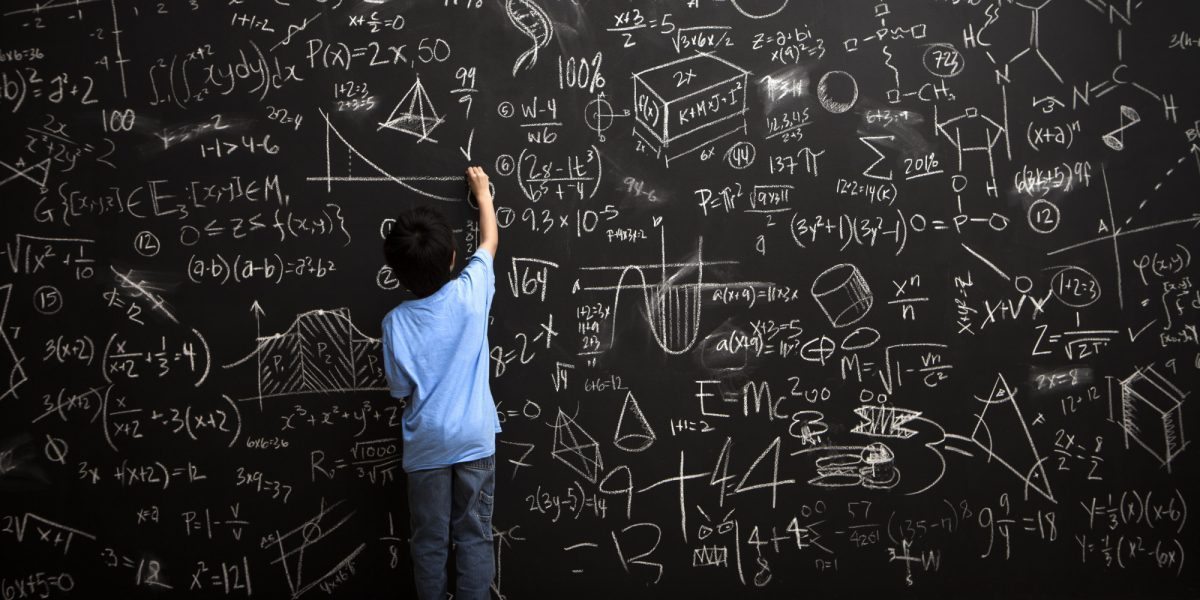 Quantum theory is strange and counterintuitive, but it’s very precise. Lots of analogies and broad concepts are presented in popular science trying to give an accurate description of quantum behavior, but if you really want to understand how quantum theory (or any other theory) works, you need to look at the mathematical details. It’s only the mathematics that shows us what’s truly going on.

No, wait. Actually a quantum object is described by a mathematical quantity known as a matrix. As Werner Heisenberg showed, each type of quantity you could observe (position, momentum, energy) is represented by a matrix as well (known as an operator). By multiplying the operator and the quantum state matrix in a particular way, you get the probability of a particular outcome. The wavelike behavior is a result of the multiple connections between states within the matrix.

Okay, maybe not. Actually, as Richard Feynman showed, the behavior quantum objects are governed by a summation of possible histories known as a path integral. In order for a quantum particle to get from point A to point B, it has to take a certain path. Since quantum objects could take lots of different paths (unlike classical particles), you have to calculate each possible path and sum them in a particular way to determine the probability that the quantum object will arrive at point B.

It turns out that there are multiple ways mathematically to describe quantum behavior. These three are just the most popular, but there are at least nine versions of non-relativistic quantum theory, each with a different mathematical formulation. But despite these mathematical differences, each of them will make the same physical predictions. When you apply these different mathematical models to a real situation, they give the same answer every time. So which one is right? Experimentally, all of them. So it really comes down to using the version you want for a particular situation. It seems the reality of quantum theory is as indefinite as quantum theory itself.

You might think this overlapping magisteria is simply due to quantum theory’s counterintuitive properties, but that’s not the case. Take, for example, the most intuitive and clear theory of Newtonian physics. In the Newtonian model, objects are solid and real, and their motion is governed by vector forces. Push on an object, and it accelerates in that particular direction. Easy peasy. Of course this view (what we might call vector mechanics) isn’t the only mathematical formulation we have.

Another approach is analytical mechanics, where instead of looking at forces we look at constraining quantities such as the object’s energy. If I toss a baseball it isn’t free to move just anywhere. Its motion is constrained by the kinetic energy of its motion and potential energy it could gain or lose from gravity. Those constraints determine the baseball’s equation of motion. Two versions using this approach are Lagrangian and Hamiltonian mechanics. There are other mathematical formulations of classical mechanics as well, such as Gauss’ principle of least constraint, and Appell’s formulation of generalized work. Each of these uses different mathematical methods, starts with different governing principles, and still gives the same physical prediction. So which one is right? Is motion all about forces, or limiting energy, or something else?

One of the fundamental ideas of science is that scientific models must be testable. There must be a way to distinguish an accurate model from an inaccurate one, and the ultimate arbiter is experiment and observation. But nothing in this idea requires that there must be one unique valid theory. Since multiple mathematical formulations each agree with experiment, they are all equally valid.

That’s perhaps the most wondrous thing about all of this. Mathematics does contain truths about our physical universe. It allows us to develop an understanding and precision we can’t get any other way. But this mathematical truth isn’t a single absolute view. Instead, mathematics is so powerful and so subtly interconnected that there are multiple roads to understanding. Two areas of mathematics that seem widely separate often reveal elegant connections, and those connections are often central to our understanding of physical reality. It’s a wondrous and amazing thing.

So to really understand the subtle beauty of physics, you do need to understand mathematics. It isn’t always easy to understand, but it’s well worth the effort.

Miss the beginning of the series? It all starts here.