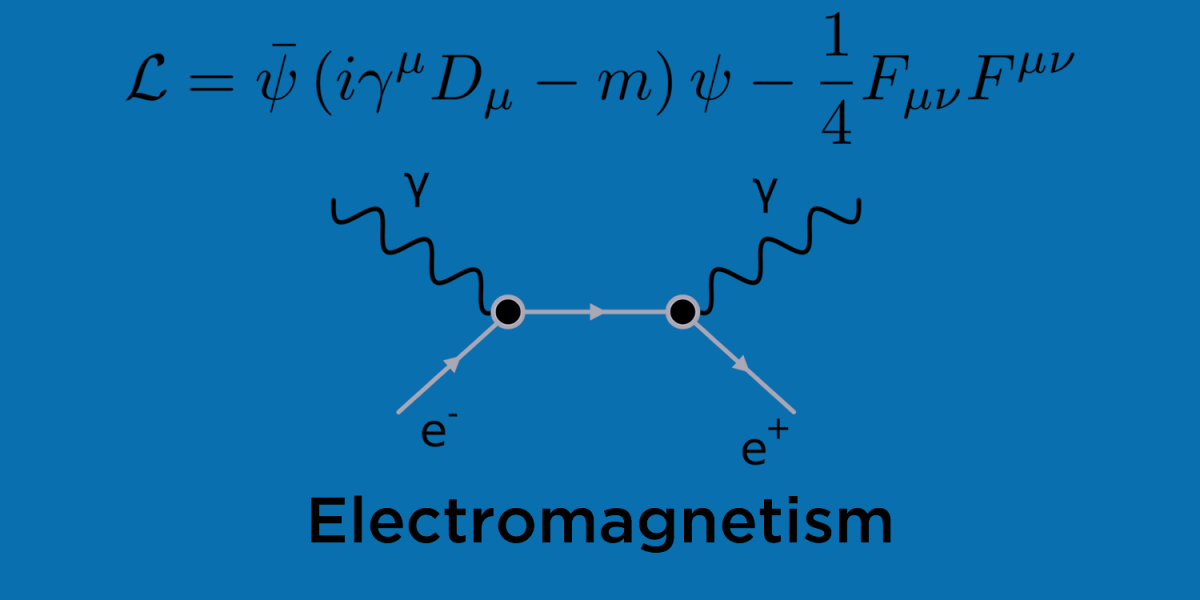 On the face of it both electricity and magnetism are remarkably similar to gravity. Just as two masses are attracted to each other by an inverse square force, the force between two charged objects, or two poles of a magnet are also inverse square. The difference is that gravity is always attractive, whereas electricity and magnetism can be either attractive or repulsive. For example, two positive charges will push away from each other, while a positive and negative charge will pull toward each other. As with gravity, electricity and magnetism raised the question of action-at-a-distance. How does one charge “know” to be pushed or pulled by the other charge? How do they interact across the empty space between them? The answer to that question came from James Clerk Maxwell.

Maxwell’s breakthrough was to change the way we thought electromagnetic forces. His idea was that each charge must reach out to each other with some kind of energy. That is, a charge is surrounded by a field of electricity, a field that other charges can detect. Charges possess electric fields, and charges interact with the electric fields of other charges. The same must be true of magnets. Magnets possess magnetic fields, and interact with magnetic fields. Maxwell’s model was not just a description of the force between charges and magnets, but a also description of the electric and magnetic fields themselves. With that change of view, Maxwell found the connection between electricity and magnetism. They were connected by their fields. A moving electric field creates a magnetic field, and a moving magnetic field creates an electric field. Not only are the two connected, but one type of field can create the other. Maxwell had created a single, unified description of electricity and magnetism. He had united two different forces into a single unified force, which we now call electromagnetism.

Maxwell’s theory not only revolutionized physics, it gave astrophysics the tools to finally understand some of the complex behavior of interstellar space. By the mid-1900s Maxwell’s equations were combined with the Navier-Stokes equations describing fluids to create magnetohydrodynamics (MHD). Using MHD we could finally begin to model the behavior of plasma within magnetic fields, which is central to our understanding of everything from the Sun to the formation of stars and planets. As our computational powers grew, we were able to create simulations of protostars and young planets. Although there are still many unanswered questions, we now know that the dance of plasma and electromagnetism plays a crucial role in the formation of stars and planets.

While Maxwell’s electromagnetism is an incredibly powerful theory, it is a classical model just like Newton’s gravity and general relativity. But unlike gravity, electromagnetism could be combined with quantum theory to create a fully quantum model known as quantum electrodynamics (QED). A central idea of quantum theory is a duality between particle-like and wave-like (or field-like) behavior. Just has electrons and protons can interact as fields, the electromagnetic field can interact as particle-like quanta we call photons. In QED, charges and a electromagnetic fields are described as interactions of quanta. This is most famously done through Richard Feynman’s figure-based approach now known as Feynman diagrams. 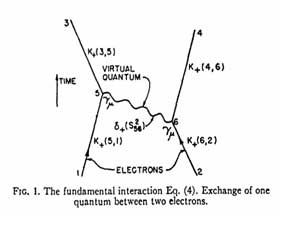 The first Feynman diagram to appear in a refereed article. Credit: Richard Feynman

Feynman diagrams are often mis-understood to represent what is actually happening when charges interact. For example, two electrons approach each other, exchange a photon, and then move away from each other. Or the idea that virtual particles can pop in and out of existence in real time. While the diagrams are easy to understand as particle interactions, they are still quanta, and still subject to quantum theory. How they are actually used in QED is to calculate all the possible ways that charges could interact through the electromagnetic field in order to determine the probability of a certain outcome. Treating all these possibilities as happening in real time is like arguing that five apples on a table become real one at a time as you count them.

QED has become the most accurate physical model we’ve devised so far, but this theoretical power comes at the cost of losing the intuitive concept of a force. Feynman’s interactions can be used to calculate the force between charges, just as Einstein’s spacetime curvature can be used to calculate the force between masses. But QED also allows for interactions that aren’t forces. An electron can emit a photon in order to change its direction, and an electron and positron can interact to produce a pair of photons. In QED matter can become energy and energy can be come matter.

What started as a simple force has become a fairy dance of charge and light. Through this dance we left the classical world and moved forward in search of the strong and the weak.

Tomorrow: The strong force answered the question of how positive charges could be bound in the nuclei of atoms, and allowed us to understand the origin of matter itself.