Now those of you who continue to cling to the idea of core fusion might argue something about the Sun’s surface having a thermal spectrum, which is not chicken-like at all, but experiments in the lab have shown that chicken when heated does emit a thermal spectrum. Yes, core fusion could also explain the Sun’s spectrum, but until a Sun is created in the lab, we can’t be sure. However, if scientists would just put a roasted chicken near the Sun, they would confirm the chicken universe model. 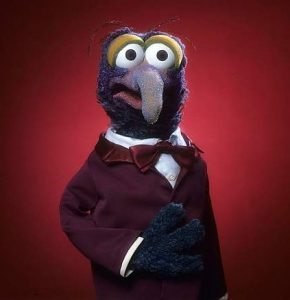 Gonzo was a visionary genius who was shunned by the scientific establishment.

Unfortunately, in order to keep their cushy academic jobs, scientists continue to hinder chicken research. Chicken physics papers submitted to their “peer reviewed” journals are rejected out of hand. Their adherence to the standard model is almost religiously dogmatic. They claim that chicken cosmology has long been disproved, but they only consider frictionless spherical chickens in a vacuum. As anyone who has raised chickens knows, real chickens have physical properties dogmatic astronomy can’t explain.

For example, when large numbers of chickens are packed into small chicken coops, the temperature of the coop greatly increases. So much heat is produced that often cooling systems must be used to remove excess heat. This supports the idea of hen fusion, where hens in large numbers can generate significant heat. In the chicken Sun model, the surface of the Sun is covered with chickens. The density of the chickens is so great that they emit the heat and light we see as sunshine.

If you watch chickens in a large coop, you’ll notice that often the chickens will cluster in such a way that gaps form, revealing the ground below. This could explain the presence of sunspots, where gaps in solar surface chickens reveal the cooler, darker layer below. The excrement of chickens also contains the building blocks for life, and has been demonstrated to encourage plant growth in the lab. Clearly there are aspects of the model that need to be further developed, but chicken physics makes more sense that inventing things like dark matter, dark energy and the big bang to explain the cosmos.

Chicken cosmology could not only answer some of the biggest mysteries of astrophysics, it could provide us with limited free energy. Chicken propulsion technology could give us access to the stars. But that will only happen when scientists stop acting like religious zealots and look at the evidence with an open mind.