Most people think of black holes as gravitational traps that suck in surrounding matter, or dark regions of intense gravity that can only be observed by the way they warp light around it. But the dynamics of material around a black hole is quite complicated, and we’re still working out the details. Take, for example, the recent observations of a black hole flare.

Much of the light we observe from the region around a black hole is in the form of x-rays. These are caused by superheated material in the accretion disk or corona around the black hole itself. Occasionally these x-rays will briefly flare up, as the black hole in our galaxy did in 2013. Such a flare could be caused by material being captured by the black hole, but it could also be caused by dynamical interactions of the surrounding material.

We’re seeing the latter effect in new results from the NuSTAR telescope. In 2014 the black hole known as Mrk 335 was seen to flare up. Within a week NuSTAR was able to observe the spectrum of the flare, and team determined from its shift of brightness and color that the flare was moving at about 20% the speed of light. This means it was an ejected corona, and not captured material.

The ability to see this level of detail around a black hole is important, because it is this type of dynamic behavior that allows us to refine our complex models of black hole dynamics. 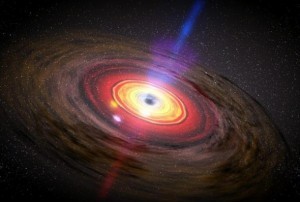 Watching A Black Hole From Your Back Yard