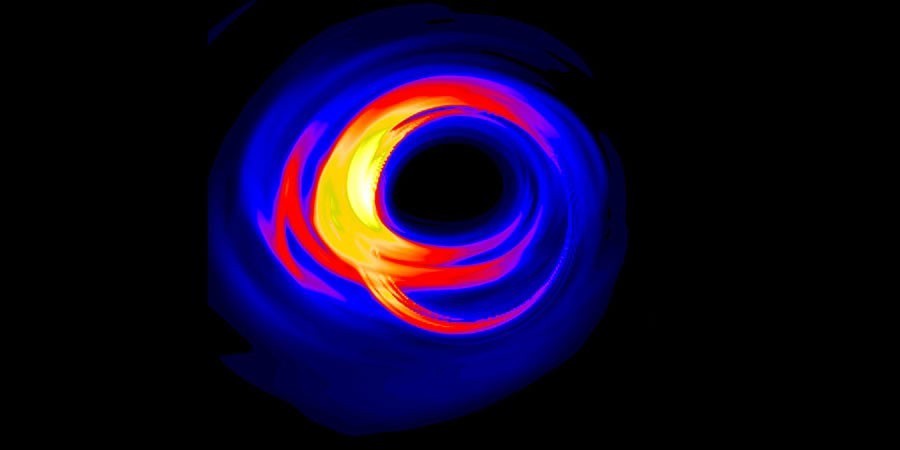 “Black holes don’t exist!” It’s a popular comment made nearly every time I write about black holes. Often such claims come from folks who also don’t believe in things like relativity or the big bang, but another group has a more subtle argument: black holes haven’t yet been proven. In a way, they have a point.

There are basically two lines of evidence to support the existence of black holes. The first is observational. For small (stellar mass) black holes, the best evidence is through micro-quasars, also known as x-ray binaries. These objects emit strong x-rays from an Earth-sized region in space. Since these objects are part of a binary system with another star, we can determine their mass by the way the two stars orbit each other. What we find is these dense objects have masses that range from 1 – 10 times the mass of our Sun.

An example of differential rotation.

We have similar observational evidence for supermassive black holes. For example, we know that quasars can emit more light than 250 billion stars from a region no larger than a light year across. When we observe the motions of stars near the centers of galaxies, they reveal the presence of a dense mass on the order of millions or billions of solar masses. In some cases we can even determine the mass of these central objects with great precision. But some of the strongest evidence comes from our own galaxy. With modern telescopes we’re able to image stars in the center of our galaxy. Over the years we’ve watched these stars as they clearly orbit a large dense mass. We know that this object has a mass of 4.1 million solar masses, and that all this mass can be no larger than our solar system (about 100 astronomical units across to be precise).

The other line of evidence is theoretical, specifically the theory of general relativity. Einstein’s theory of gravity makes very clear predictions about the motions of planets, how light is affected by gravity, gravitational redshift, the timing of GPS, and even the twisting of space and time. Every experimental test we’ve tried so far, general relativity has passed.

General relativity also makes several predictions about black holes. One is that given enough mass, an object will collapse into a black hole. This is true no matter what the mass is made of, since any energy or force trying to prevent the collapse actually starts helping gravity more than it opposes it. As we’ve seen in an earlier post, that upper limit is around 2.5 – 3 solar masses. Interestingly, of all the x-ray binaries we’ve observed, differential rotation has only been observed in ones less than 2 solar masses. The smallest black hole candidate (with so such differential rotation) has a mass of about 3 solar masses.

Another clear prediction is that black holes don’t have visible surfaces. Black holes are so dense that light can’t escape them. Surrounding a black hole is a “distance of no return” known as the event horizon. Anything that crosses that line is forever trapped. While we’ve not yet observed an event horizon, we do have indications that at least one supermassive dense object does not have a surface. A team looked at matter falling into the supermassive object at the center of the M87 galaxy. Unlike the small 4-million solar mass object in our galaxy, M87’s object has a mass of 6 billion suns. If this object had a surface, then matter falling into the object would strike the surface, and the energy released would cause a burst of light. If the object doesn’t have a surface, then there wouldn’t be a secondary brightening as the matter falls into it. The team found no indication of a secondary brightening.

So we know very clearly that neutron stars exist, and that somewhere between 2 – 3 solar masses they switch from being neutron stars to something that looks like a black hole. General relativity predicts that beyond 2.5 – 3 solar masses these objects must be black holes. We know that supermassive objects exist in most galaxies, and there is evidence that such objects do not have a visible surface. Again, according to general relativity, these objects should be black holes. In addition, there’s been a great deal of work modeling the dynamics of black holes within galaxies, and these models are in good agreement with the dynamics we observe. So there is a wealth of evidence to support the existence of black holes, and this is why most astronomers feel that black holes exist.

But there are some who would argue that all of this is still insufficient. All we’ve shown is that either black holes exist, or there are dense objects that closely approximate black holes. Perhaps these objects are all really dense, but don’t have an event horizon. For example the black hole in our galaxy would need to be the size of Earth’s orbit, which is a hundred times smaller than the observational limit thus far. All this evidence implies the existence of black holes, but it doesn’t prove black holes exist.

While technically that’s true, it doesn’t gain you much. Any such dense object would violate both the standard model of particle physics and general relativity, which are deeply robust theories. So technically the claim is either these things are black holes, or they are objects that mimic black holes by violating known physics. Of course that could be said about anything. Either electrons exist, or they are objects that mimic electrons through unknown physics. Either neutron stars exist, or they mimic neutron stars through unknown physics. It becomes a game of the “science of the gaps” where one can always demand just one more piece of evidence before they are truly convinced.

So the broad consensus is that black holes definitely exist. There are some astronomers who prefer to withhold judgment until we resolve the region around an event horizon. There are projects in development such as the Event Horizon Telescope which hope to achieve such observations. Even then, such observations will be compared to the predictions of general relativity. If the EHT makes observations in agreement with general relativity, then we can say either there’s an event horizon, or there’s something that mimics an event horizon in a way that defies known physics. Its always a question of how far down that rabbit hole you want to go.

So it’s absolutely clear to me that black holes exist. But as with anything, I could be wrong.

Yes, Virginia, There Are Black Holes
I’d Be Happy To … For $250 an Hour
Science and Non-Science
Have You Heard the One About…
How To Get Rid Of A Black Hole
Hype It Up
How Computer Models Helped Discover Gravitational Waves
Can Astronauts See Stars In Space?
Direct Detection Of Gravitational Waves
Wandering Stars