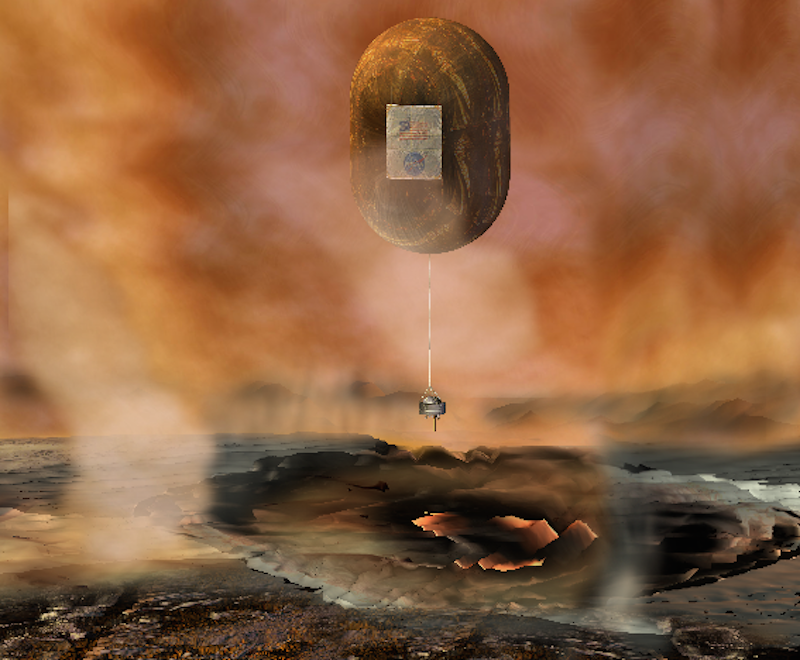 There are countless opinions about how to cook the best turkey. Some suggest slow roasting it for hours, while others prefer cooking at high heat. Some even dare to deep fry it in peanut oil. Of course all of these cooking suggestions are Earth-based, which is a bit limiting. Suppose you wanted to have a Thanksgiving dinner elsewhere in the solar system, such as Venus?

While Mars is a perennial favorite for human exploration, Venus is a strong second. It is similar in size to Earth, and has a thick atmosphere. Plus, at an altitude of about 50 kilometers above its surface, the temperature and atmospheric pressure is similar to that of Earth. So in many ways it would be much more welcoming to Earth explorers than Mars. Since Venus has the highest surface temperature of any planet in the solar system, it also would provide the opportunity to cook our Thanksgiving turkeys with natural heat.

Unfortunately, we couldn’t simply roast our turkey on the Venusian surface. With a surface temperature of 460 oC ( 860 oF) and an atmospheric pressure more than 90 times that of Earth at sea level, our turkey would be blackened to a crisp while the stuffing is still cold. Not even a foil tent can prevent that tragedy. So we would have to be a bit more creative.

Atmospheric temperature of Venus as a function of depth. Credit: Wikipedia

Given that a crewed mission to Venus is already a huge engineering challenge, it’s safe to assume that any colonists living in Venus’ upper atmosphere could send airships deeper into the atmosphere with relative ease. As you move closer to the Surface of Venus, the temperature and atmospheric pressure increases, so it would really be a matter of getting your turkey to a particular atmospheric depth for a certain amount of time. For example, Alton Brown suggests the high-temperature method for turkey, roasting it at about 500 oF  (260 oC) for about 2.5 hours. So you would just need to put your turkey into a probe and send it to a height of about 25 kilometers for a couple hours. While you’re at it, why not put all your food in different probes. Your pumpkin pie would need to go to an altitude of 35 km for about 40 minutes. Send your corn bread to about 35 km for 30 minutes, and so on.

If you timed your probes right, all your dishes could be cooked and piping hot at the same time. All you’d need to do is pour a glass of wine and brace yourself for the inevitable political arguments over dinner. Such as whether those colonists on Europa should be allowed to form an autonomous government.

Delta-V
Dance Of The Planets
The Martian Chronicles
Connected