The most powerful way a star can die is through a supernova explosion. Through nuclear physics and the pull of gravity, a star can be ripped apart, shining brighter than an entire galaxy for a brief moment of cosmic time. There are several kinds of supernovae, but one particular kind known as Type Ia is particularly interesting to astronomers. And we still aren’t entirely sure how they occur.

The most popular theory is that they are caused by particular kind of binary star, where a white dwarf orbits a red giant. White dwarf stars typically have a mass about equal to our Sun. That’s because if they get much larger they reach what is known as the Chandrasekhar limit, and collapse under their own weight. If a white dwarf happens to orbit closely to a red giant, outer layer of the red giant can be captured by the gravitational pull of the white dwarf. This increases the mass of the white dwarf. And if its mass reaches the limit, then boom! 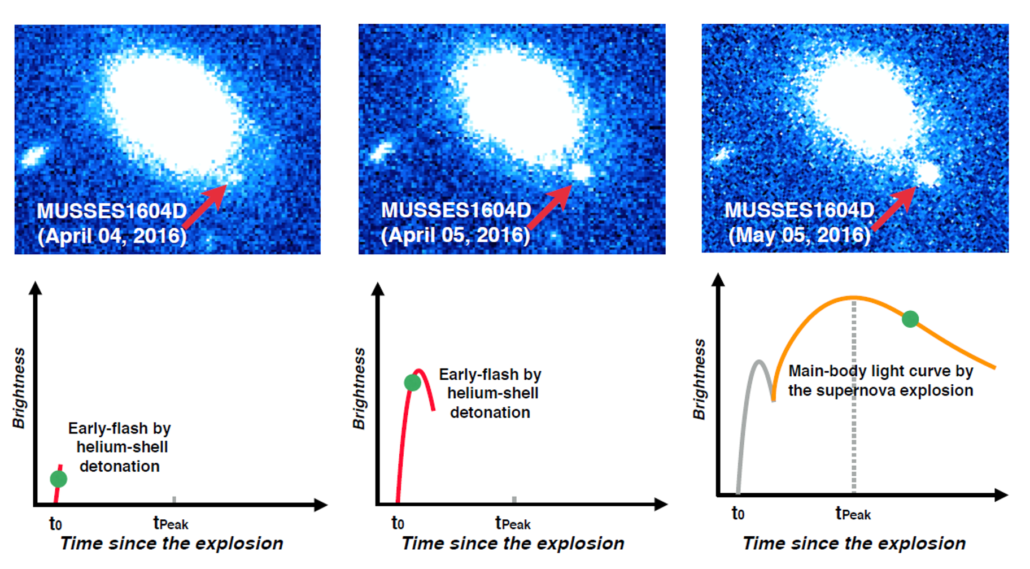 Evidence of an early helium flash before a supernova is triggered. Credit: Institute of Astronomy, the University of Tokyo

At least that’s the idea. The challenge is to work out the details. Just how does the gravitational collapse of a white dwarf trigger the type of nuclear reactions necessary to cause the star to explode? But new research shines more light on that question.

Using data from the Subaru telescope and the Gemini-North telescope, a team of astronomers captured the earliest moments of a Type Ia supernova. They found that a small initial flash occurred before the much larger supernova explosion. The spectrum of the initial explosion seems to indicate that it was caused by the rapid fusion of helium on the star’s surface. This effect has also been seen in computer simulations.

In this model, a build up of helium on the surface of the white dwarf causes it to start fusing rapidly. The explosive detonation of helium creates shock waves that propagate to the center of the star, where they trigger a chain reaction of fusion in its core. In this way, the explosion is not caused directly by reaching the Chandrasekhar limit, but by a chain reaction of rapid nuclear fusion. This would explain why there is some small variation in the brightness of Type Ia supernovae. It could also help us better refine how these supernovae are used to measure galactic distances.

We’ll need to observe more of these supernovae to learn whether this is the primary trigger mechanism for Type Ia supernovae, or if there are other ways these stars can be detonated. But for now it seems clear that with a bit of helium we can detonate a star.

Even Odds
Standardizing the Candle
Dancing With the Stars
Play It Again, Sam
The Great Eruption
Kick Me
The Crab Nebula