Measuring redshift is fairly straightforward. By comparing the spectrum of a distant galaxy with the known spectra of atoms and molecules here on Earth, we can determine the amount of redshift expressed in a quantity known as z. To measure distance, however, we need to use observations of a kind of supernova known as type Ia. These are often described as “standard candles” that always explode with the same brightness, but that isn’t actually the case. Some type Ia supernovae are brighter than others, so you can’t simply use their observed brightness as a measure. 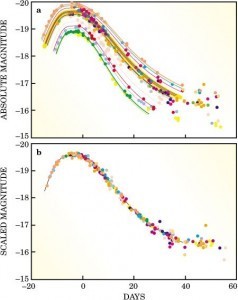 Type Ia supernovae are identified by their emission spectrum. Their spectrum lacks hydrogen lines, and has a distinct silicon emission line when it is near maximum brightness. From this we can clearly distinguish type Ia from other supernovae. What we know from observing type Ia supernovae in nearby galaxies is that there is a specific relation between their peak brightness and the time it takes for them to decay. Bright supernovae shine longer than dim supernovae. From the ratio of peak to width of their light curve, we can calibrate these supernovae to determine their absolute magnitude. Comparing that with their observed magnitude we can determine their distance.

Calculating distance is based upon two assumptions. The first is that our view of the supernovae is relatively unobscured. We calculate distance using the inverse-square relation for light, but that only works if there isn’t gas or dust absorbing some of the light. While there can be gas and dust between us and a supernova, it wouldn’t absorb all frequencies of light by the same amount. Blue wavelengths are absorbed much more than red wavelengths (creating an effect known as reddening) and infrared wavelengths aren’t absorbed much at all. Since distant galaxies are deeply reddened, gas and dust have little effect on their observed brightness. So we know our first assumption is valid.

The second assumption is that nearby type Ia supernovae are the same as distant ones. Interestingly, in recent years there’s been some evidence that might not be the case. Recent observations of a large number of supernovae seem to show two classes of type Ia supernovae, with slightly different ratios. If this is true, then it could readjust the amount of dark energy the universe has. However this would be a minor adjustment to our understanding of cosmology, not a revolutionary change. While supernovae are a great way to observe the effects of dark energy, they aren’t the only way. We can also look at things such as the clustering of galaxies on large scales, and the fluctuations within the cosmic microwave background to determine the amount of dark energy in the universe. What we find is that they all agree reasonably well.

So while type Ia supernovae aren’t standard candles, they are standardizable candles, and they tell us a great deal about the cosmos.