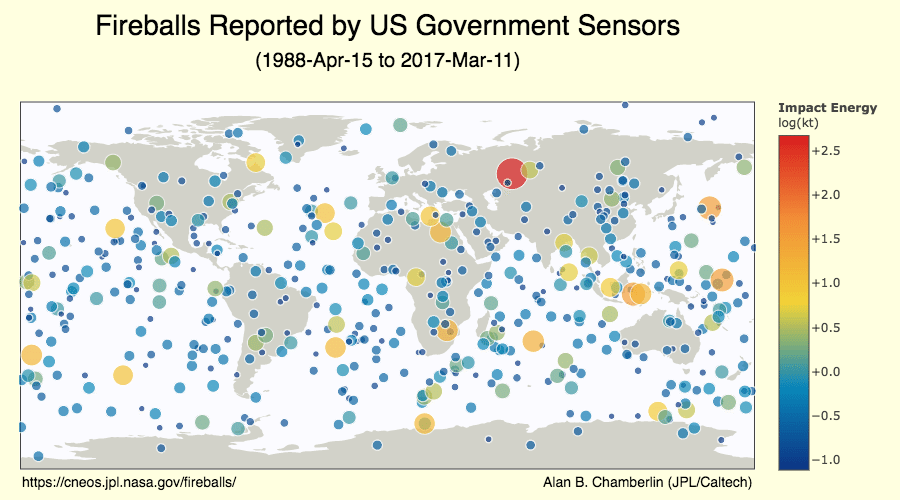 Yesterday the kilometer-wide asteroid 2014 JO25 passed within 1.8 million kilometers of Earth. Although that’s nearly 5 times farther than the Moon, it’s a “near miss” by astronomical standards. If such an asteroid were to strike Earth, it would make a crater more than 10 kilometers wide and spread debris more than 100 kilometers in all directions. That’s large enough to wipe my home city of Rochester NY off the map. Fortunately there was no risk of impact for Rochester or anywhere else on Earth, but what are the odds that a sizable asteroid would strike your home town?

We know that large asteroid impacts are rare. Small asteroids are far more common than large ones, and they tend to vaporize before striking the ground. We also know that the potential damage from an asteroid depends not only on its size, but on the speed of impact as well as the angle and location of impact. A fast asteroid striking nearly perpendicular to the ground is far more dangerous than a slower one coming in at a shallow angle.

To study the threat of various impacts, a team simulated 50,000 impacts with asteroids ranging 15 – 400 meters in diameter. These are the most common size for potentially threatening impacts. They then looked at how many lives might be lost not just from the impact, but from secondary factors such as explosive air bursts and tsunami. What they found was that land impacts were an order of magnitude more dangerous than water impacts. They also found that the most dangerous aspects of an impact were not the actual impact location and resulting debris, but rather the heat and explosive pressure changes that occur in the surrounding area. This was exactly what happened with the meteor near Chelyabinsk in 2013, where the air blast caused most of the injuries.

Just to be clear, the risk of being injured or killed by an asteroid is extraordinarily low. You should worry more about your cholesterol and looking both ways before crossing a street. But studies like this help us define a defense strategy against possible impact strikes, which is worth the gamble.