We’ve known for nearly a century that the Universe is expanding. The fact that galaxies are receding away from us was first demonstrated by Edwin Hubble in 1929, building upon the work of Henrietta Leavitt and others. Since then we’ve developed a variety of ways to measure the rate of cosmic expansion, and while they are broadly in agreement, there are small discrepancies between them. As a result we still don’t know exactly how fast the Universe is expanding, as astrophysicist Ethan Siegel has so clearly explained. Now a new method of measuring cosmic expansion may settle the issue, but it also raises more questions.

Hubble’s original measurement of the constant compared the distances of galaxies with the redshift of their light. He calculated galactic distances by measuring the brightness of variable stars known as Cepheid variables, and combined them with measurements of galactic redshifts made by Vesto Slipher. He found that more distant galaxies had greater redshifts, and presumably were receding from us at a greater rate. Hubble’s original value for the constant was about 500 km/s/Mpc, which caused a bit of a cosmological crisis. If the value was correct, the Universe was only about 2 billion years old, which contradicted geological evidence that showed the Earth was more than 4 billion years old.

Over time our measurements of the Hubble constant got better, and the results settled around a much smaller value of around 70 km/s/Mpc, putting the age of the Universe at about 14 billion years. We also developed different ways to calculate the Hubble constant using different types of data, and they each produced similar results. This means we know for sure that the Universe is expanding, and we have a pretty good handle on just how fast it’s expanding. But while these different methods broadly agreed, they didn’t exactly agree. It was generally thought that as our measurements got better this discrepancy would go away, but it didn’t. Something was clearly wrong with our understanding of cosmic expansion. 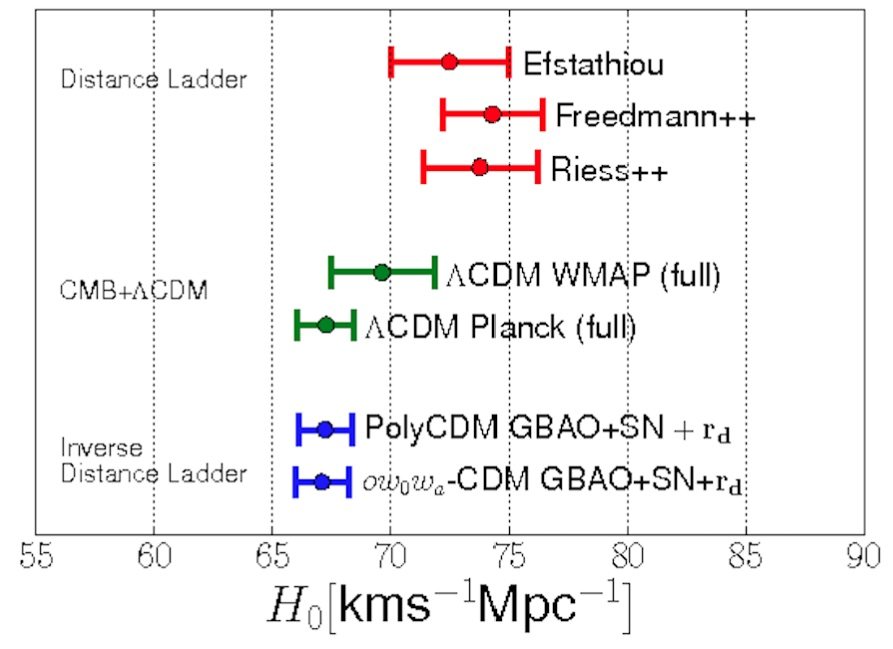 Hubble’s method of comparing distance with redshift has been extended by shifting from Cepheid variables to supernovae. A particular type of supernova known as Type IA allows us to determine galactic distances across billions of light years. In 2016, observations from the Hubble telescope using this approach gave a value of 73.24±1.74 km/s/Mpc, which is on the high side of modern values.

A different approach looks at fluctuations in the cosmic microwave background (CMB). The CMB is the thermal remnant of the big bang, and while it is quite uniform in temperature, there are small-scale fluctuations. As the Universe has expanded, these fluctuations are stretched, so the scale at which fluctuations peak gives a value of the rate of cosmic expansion, and thus the Hubble constant. The most precise CMB measurement of the Hubble constant was made by the Planck satellite, and gave a result of 66.93±0.62 km/s/Mpc, which is on the low side. The Planck result agrees with another method known as baryon acoustic oscillation (BAO), which looks at how galaxies cluster together across billions of light years, which gives a value of 67.6±0.7 km/s/Mpc. 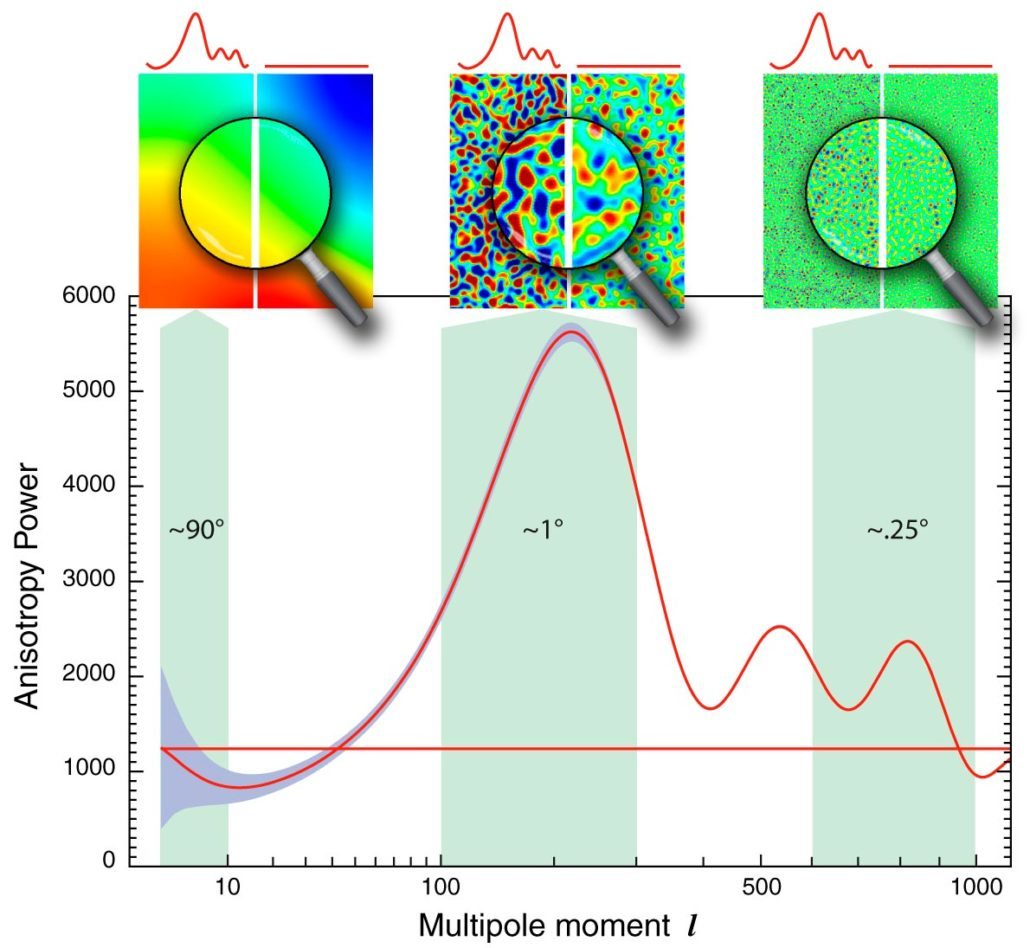 These disagreements are problematic because they point to problems in our cosmological model. Although each result is quite sophisticated, they depend upon certain assumptions about the Universe. Our current model, known as the LCDM model, includes regular matter, dark matter and dark energy, as well as things such as how flat the Universe is on small scales. Each of these can be measured by independent experiments, but the results all have a bit of uncertainty. Tweak the values of these parameters within the model, and the value of the measured Hubble constant shifts. So we could tweak the model to make Hubble constant results fit, but tweaking models to fit your expectations is bad science.

Now there’s a new method for determining the Hubble constant, and its result is very interesting. 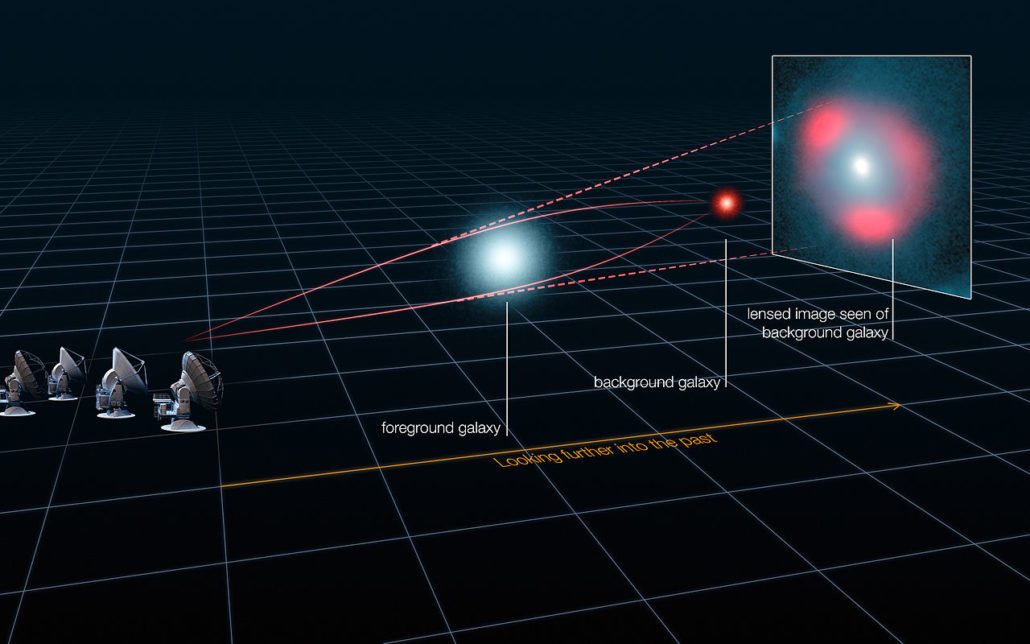 Rather than looking at the CMB or measuring galactic distances, the new approach looks at an effect known as gravitational lensing. As light passes near a large mass such as a star or galaxy, it is gravitationally deflected. As a result, light from a distant object such as a quasar can be deflected around a less distant galaxy. Instead of seeing one image of the distant quasar, we see multiple images. But if we look at these lensed images things get very interesting. Each image of the quasar has taken a different path, and those paths can have different lengths. So some images reach us sooner than others. We’ve seen this effect with distant supernovae, for example, allowing us to see multiple “instant replays” of a supernova over the course of a few decades. Quasars can fluctuate in brightness, which allows us to measure the timing between lensed images of a particular quasar.

This agrees pretty well with the Hubble results, but not with the CMB results. Since the result is less model dependent, it raises questions about our cosmological model. Why are the CMB and BAO results so much lower than the others? It isn’t clear at this point, and while this new result is great, it doesn’t solve the mystery of Hubble’s constant. 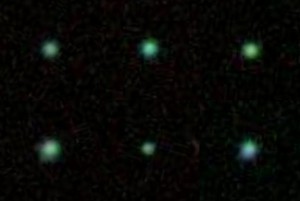 Give Peas a Chance
The Chicken or the Egg