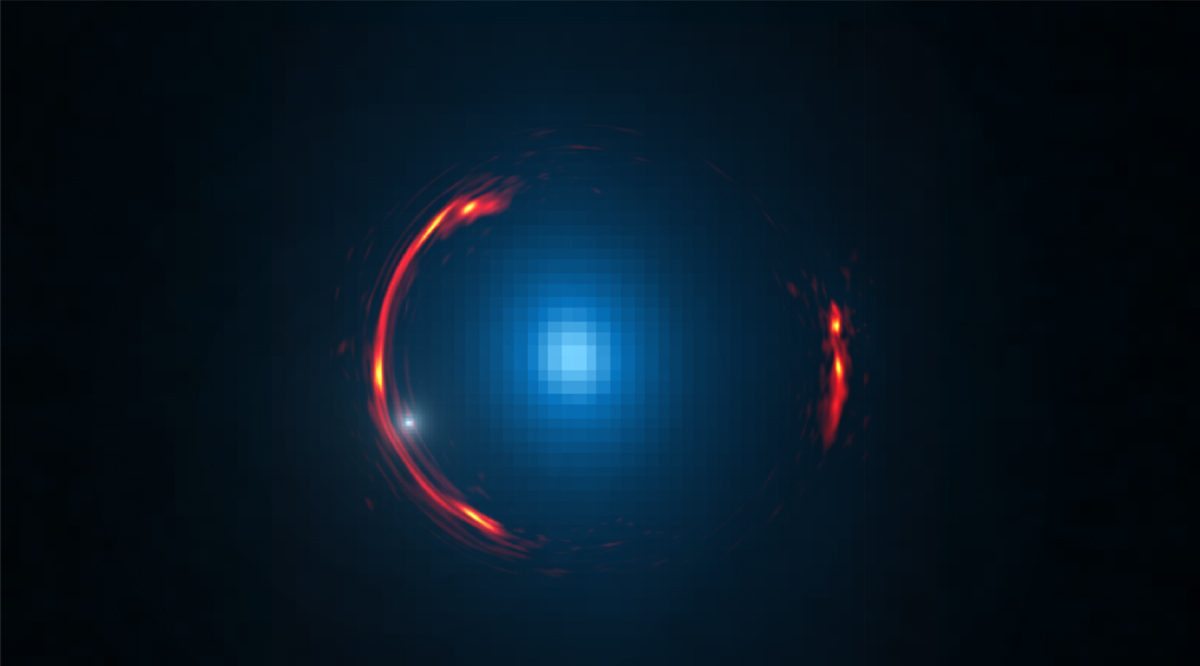 The ALMA telescope has been giving us some amazing images of gas and dust in the Universe, such as those of early solar systems forming. The telescope’s high resolution also allows us to see the galactic effects of gravitational lensing, which has led to the discovery of a dwarf galaxy orbiting a galaxy 4 billion light years away.

Gravitational lensing occurs when light from a distant object is deflected by the mass of a closer galaxy. The deflected light of the distant galaxy often distorts its appearance into a faint arc around the foreground galaxy, as seen in the image above. Since the light deflection depends upon the amount and distribution of mass in the foreground galaxy, we can measure the mass of an object by the way it deflects light. For example, the distribution of dark matter in galaxy clusters has been measured in this way.  It’s one of the ways we know dark matter exists.

Recently a team looked at the data from this particular galaxy (known as SDP.81), looking for odd fluctuations in the lens image. Any image like this will have some random fluctuations, but the team looked for fluctuations that existed across multiple wavelengths. This would indicate a real gravitational effect rather than some fluke in the data. What they found was a particular distortion that seemed to be caused by clump of mass near the galaxy. The mass of the clump is about a thousandth that of our Milky Way, which is typical for the mass of a dwarf galaxy. This dwarf galaxy isn’t seen at visible wavelengths, so it’s possible that this is a dark matter galaxy orbiting the main foreground galaxy.

Discoveries like this are important because they could solve one of the big mysteries of dark matter. Dwarf galaxies are seen around larger galaxies, including our own, but according to computer simulations involving dark matter, the number of dwarf galaxies around the Milky Way (and other similar galaxies) should be higher than what we observe. This could be explained by the presence of dark matter galaxies, which have the mass of a dwarf galaxy but very few stars, making them dim and difficult to observe. But speculating that dark matter galaxies are common isn’t the same as actually observing them, and we’ll need clear evidence before this becomes the accepted solution.

What this new work shows is that such dwarf galaxies do appear to lurk around other galaxies, and they can be found by gravitational lensing effects. With more studies like this, we may be able to put one more dark matter mystery to rest.