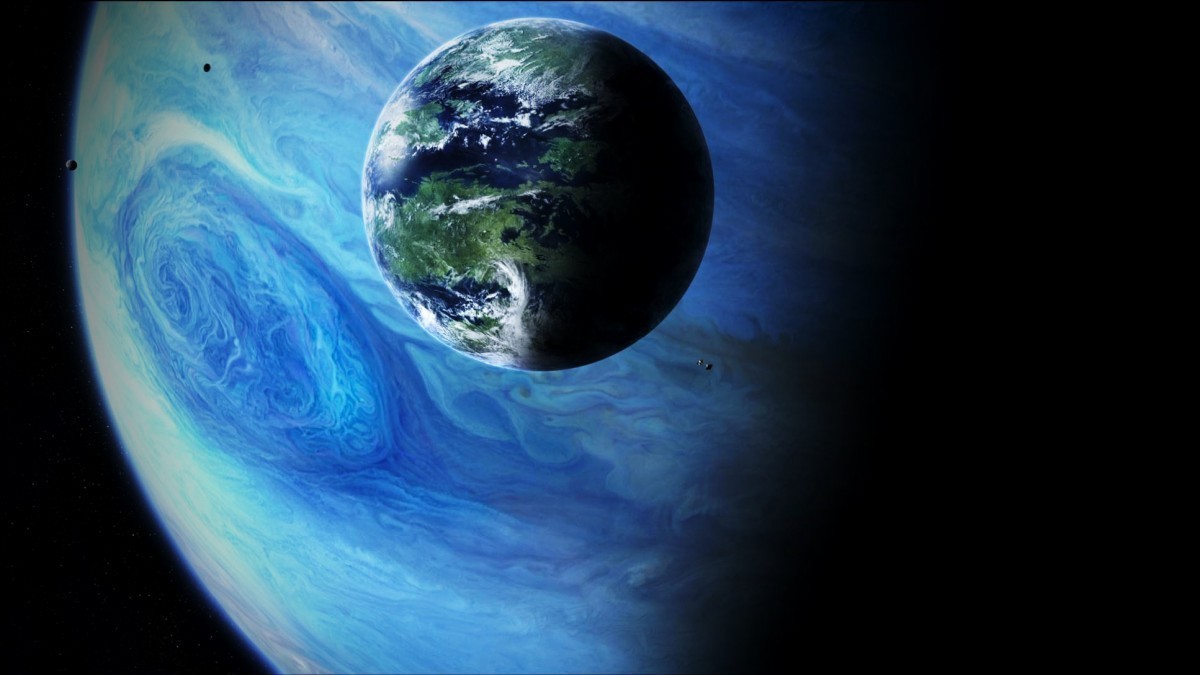 Our solar system follows a clear pattern. Small, rocky planets close to the Sun, large gas planets farther out, and a belt of astroids between them. On a broad level that would seem to make sense. As the Sun formed, the intense energy of its newfound solar wind would tend to push lighter elements such as hydrogen and helium toward the outer solar system, leaving only rocky material behind. It’s tempting then to imagine that most solar systems would follow a similar pattern of close rocky planets and more distant gas giants. But as we’ve discovered more exoplanetary systems, we find that isn’t the case. In fact it increasingly looks like our solar system might be the exception rather than the norm. 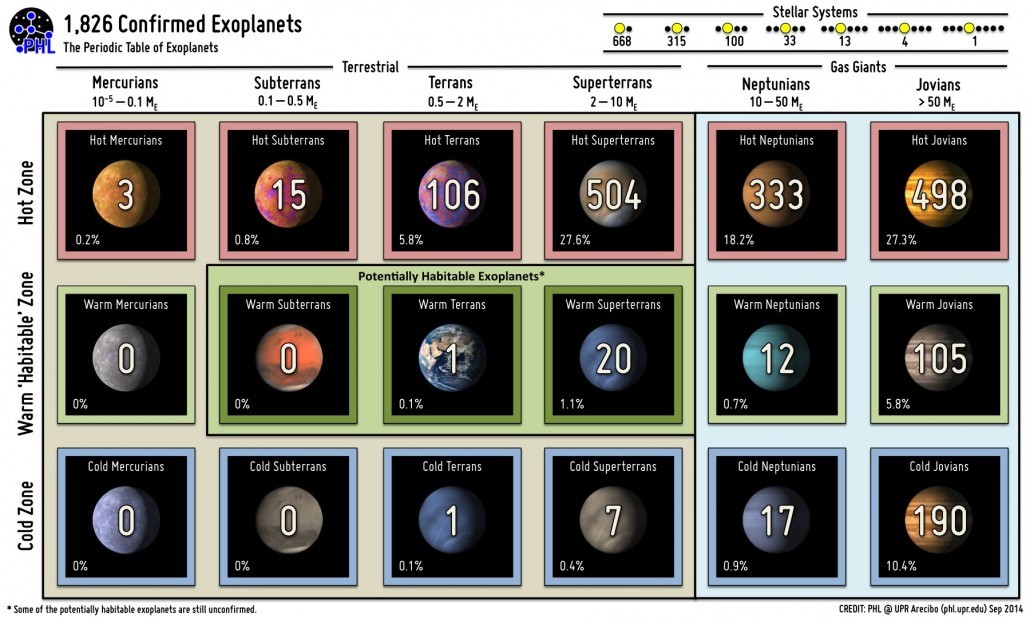 When we look at other star systems, we find that a gas planet far from its star is rather unusual. One way to categorize planets is by the energy they receive from their star. Hot planets, such as Mercury and Venus in our solar system, warm (possibly habitable) planets such as Earth and Mars, and cold planets such as Jupiter and beyond. The cut-offs for a particular system depend upon the energy produced by a particular star, but it gives a good idea of near, mid-range and distant planets. In our own solar system, all the gas planets are “cold” planets. But among all confirmed exoplanets, less than 20% of gas planets are cold. The most common type of gas planets are “hot jovians.” These are large, Jupiter-mass planets close to their star.

To be fair, the methods we use to detect exoplanets, such as watching a star dim when a planet passes in front of it (transit method) or measuring the oscillation of a star due to the gravitational tug of an orbiting planet (Doppler method) make it inherently easier to discover large, close planets. But even when this bias is taken into account, it appears that hot jovians are more common than cold ones.

Through computer simulations, we have some ideas as to why that is. In a young system, planets form within a protoplanetary disk, which is basically a fluid of gas and dust. The gas is typically at least partially ionized, so it interacts with the magnetic field of the central star. Because of the dust collisions and clumping, there is also turbulence within the disk. In physics, such a system can be described by magnetohydrodynamics. The equations for such a system are extremely difficult to analyze, but with modern supercomputers we have been able to discover some general trends. 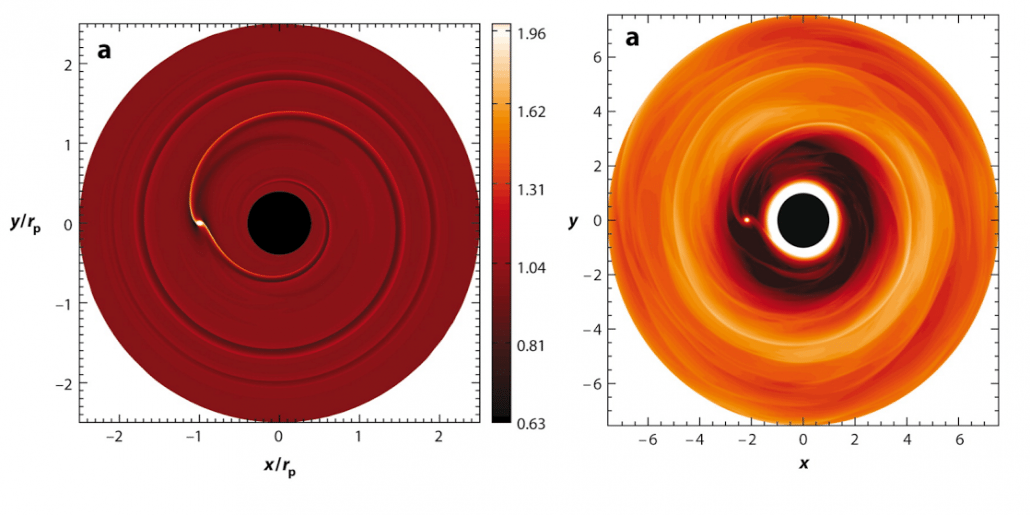 Low mass planets (less than 10 Earth masses) don’t strongly disturb the overall structure of the protoplanetary disk. Their interactions with the disk induce what is known as a spiral density wave within the disk. One wave spirals inward in the leading direction of the planet’s motion, while another wave spirals outward on the trailing edge. Since the drag from the outer spiral is typically larger than the drag from the inner spiral, the planet will tend to move closer to the star fairly quickly. This is known as Type I migration.

For high mass planets (greater than 10 Earth masses, or just below the mass of Uranus and Neptune) not only is a density wave induced, but the planet creates a gap in the protoplanetary disk. You can see this in the right figure above. This means that while there is still a net inward drag, it’s substantially smaller. So the planet would gradually move inward during its formation. This is known as Type II migration. The net effect of both of these dynamics is that planets formed in the disk will tend to move toward the star, and thus close, hot, planets are common.

So why did Jupiter form so far away from the Sun? Trick question: it didn’t.

According to the Grand Tack model, Jupiter likely started to form at about the current distance of Mars. Due to the drag forces of the early solar system it migrated toward the Sun, perhaps as close as the modern orbit of Venus. It was on track to becoming a hot jovian planet were it not for the gravitational interactions of Saturn. The two planets entered a gravitational resonance, where Jupiter would make 3 orbits for every 2 of Saturn. This 2:3 resonance gradually drove the planets outward. Subsequent interactions with Uranus and Neptune drove those planets outward as well.

Jupiter’s journey through the inner solar system explains why our solar system has no hot jovian worlds. It also explains why we have no “super-earths,” when such large worlds — with rocky cores like Earth but much smaller hydrogen-helium envelopes than Neptune — are much more common in other planetary systems. Jupiter’s migratory journey would have cleared any young super-earths from the inner solar system. The rocky worlds we see today began forming afterwards, and were thus much smaller than expected. 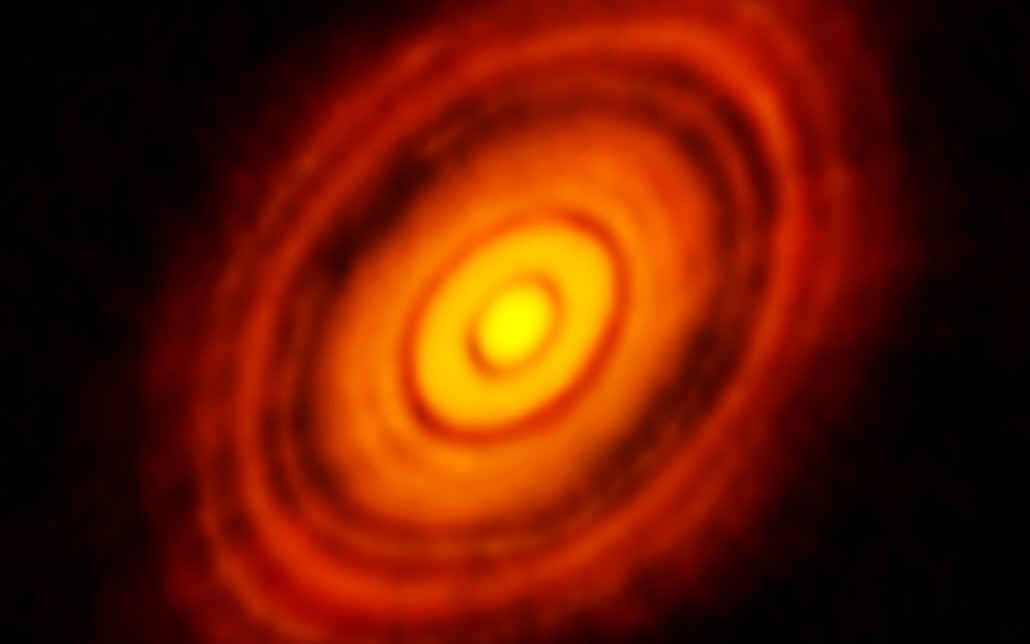 We can now observe planets forming around other stars. Credit: ESO

The simple division of our solar system into rocky and gassy worlds is the result of a complex planetary dance that in many ways defies the odds, and lies on the outskirts of what’s “normal” or, at least, average. But the galaxy is a very large place, with somewhere around 300 billion stars, and therefore, 300 billion chances at life, and of having rocky, Earth-like planets in their habitable zones. While there are likely many other planetary systems similar to ours, the vast majority will be devoid of anything like our home world. As we seek out new worlds with life — and potentially, new civilizations — on them, our best chance for an Earth-like planet might not be a planet like ours, but rather on a world that’s right out of Star Trek: the twin moons Remus and Romulus, orbiting a gas giant which in turn orbits its parent star.

True Blue
By the Numbers