Our fate is written in the stars, so the old stories go. It makes for thrilling drama, but it isn’t the way the Universe works. But there’s an interesting effect of quantum mechanics that might leave an opening for a starry fate, so a team of researchers decided to test the idea.

The idea stems from a subtle effect of quantum physics demonstrated by the Einstein-Podolsky-Rosen (EPR) experiment. One of the basic properties of quantum objects is that their behavior isn’t predetermined. The statistical behavior of a quantum system is governed by the laws of quantum theory, but the specific outcome of a particular measurement is indefinite until it’s actually performed. This behavior manifests itself in things such as particle-wave duality, where photons and electrons can sometimes behave like particles and sometimes like waves.

One of the more subtle effects related to this property is known as entanglement, when two quantum objects have some kind of connection that allows you to gain information about object A by only interacting with object B. As a basic example, suppose I took a pair of shoes and sent one shoe to my brother in Cleveland, and the other to my sister in Albuquerque. Knowing what a prankster I am, when my sister opens the package and finds a left shoe, she immediately knows her brother was sent the right one. The fact that shoes come in pairs means they are an “entangled” system.

The difference between shoes and quantum entanglement is that the shoes already had a destined outcome. When I mailed the shoes days earlier, the die was already cast. Even if I didn’t know which shoe I sent to my brother and sister, I definitely sent one or the other, and there was always a particular shoe in each box. My sister couldn’t have opened the box to find a slipper. But with quantum entanglement, slippers are possible. In the quantum world, it would be like mailing the boxes where all I know is that they form a pair. It could be shoes, gloves or socks, and neither I nor my siblings would know what the boxes contain until one of them opens a box. But the moment my brother opens the box and finds a right-handed glove, he immediately knows our dear sister will be receiving its left-handed mate.

If all of this sounds really strange, you’re not alone. Even quantum physicists find it strange, and they have confirmed the effect countless times. It’s such a strange thing that some have argued that quantum objects must have some kind of secret information that lets them know what to do. We may not know what the outcome might be, but the two quantum objects do.

The key to doing the EPR experiment is to ensure that entangled objects are measured in a random way. That way the system is truly indefinite until one of the objects is measured. This is usually done by letting a random number generator decide the measurement after the experiment has begun.  But if you really want to be picky, you could argue that while the experiment is being set up, there is plenty of time for the system to know what is going on. Technically, the experiment, random generator, and scientist are all “entangled” as a single system, so the outcome may be pre-biased. What looks like a random choice made after the experiment started may not actually be random. This is known as the setting independence problem. 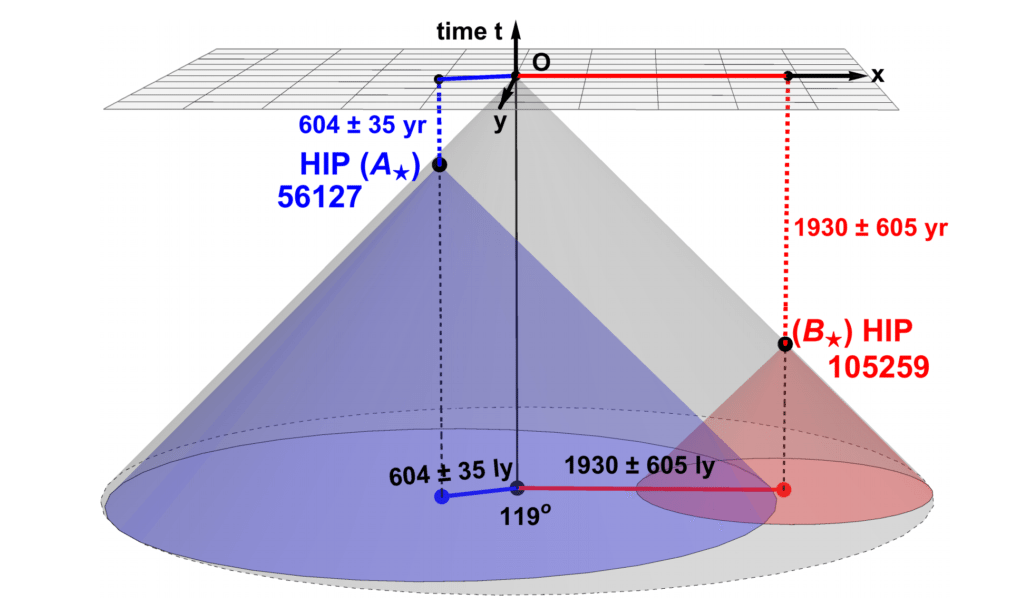 To address this issue, the team used distant stars to roll the dice for their experiment. Rather than using a local random generator, the team took real-time observations of two stars. One star is about 600 light years away, and the other is about 1,900 light years away. They took observations of each star at particular wavelengths to ensure the light wasn’t influenced by local effects such as Earth’s atmosphere, and use the observations as their random number generator. It would take hundreds of years for the quantum objects of experiment to entangle with these distant stars, so this solves the independence problem. What they found was that Bell’s inequality was violated in their experiment, just as it is in similar experiments, meaning that the system can’t have any hidden information to bias the outcome. So once again the EPR experiment shows there aren’t any hidden variables within the system.

Now it is true that this new experiment doesn’t fully solve the independence problem. Perhaps the experiment, scientists and the entire region of stars within hundreds of light years conspired to ensure the system had inside information. That’s theoretically possible, but it would have had to been given to the experiment at least 600 years ago. As the authors note, the experiment would have been given insider information about the time the Gutenberg Bible was being printed.

So we can safely assume that there aren’t any hidden variables within the system, and quantum theory acts just as we’d expect.

Boltzmann’s Brain
This Sucker’s Nuclear?
The Way the Universe Changed
A Slice Of Pi
Numbers Game
From Atoms To Everything
Antimatter Astronomy
Need for Speed
The Sun’s Magic
Wonder Year