Sunspots are one way we can track the activity of the Sun. There have been fewer sunspots than usual in recent years, and that may point toward an historic solar minimum.

Sunspots are dark patches that occasionally appear on the surface of the Sun. They aren’t actually dark. If you could see a sunspot by itself it would appear bright red, but since sunspots are about a quarter as bright as the rest of the Sun, they appear as dark regions. Since the early 1600s astronomers have counted the number of sunspots over the years, and we’ve noticed a few patterns. One is that sunspot counts vary between maximum and minimum over an 11-year period. There are other patterns as well, such as the Gleisberg Cycle, which lasts 80 – 90 years.

There are times when the pattern seems to break down, and the Sun can enter into an extended period of little sunspot activity. The most famous is the Maunder minimum of the 1600s. While we don’t have direct sunspot counts before the early 1600s, we can look at the levels of carbon-14 as measured from tree rings. Since carbon-14 levels have a good correlation to sunspot counts, we can get a handle on a much longer history of sunspots. It turns out there have been other periods of minimum activity, such as the Wolf minimum of the 1300s. In general, the sunspot activity of the Sun in recent centuries is somewhat higher than most, except for a period during the middle ages known as the Medieval maximum.

For the past couple of cycles the sunspot maximums have been lower than usual. The pattern is similar to the early stages of the Dalton minimum in the early 1800s, which has raised the question of whether we are entering a period of reduced sunspot activity. This may also have some effect on global temperatures. The Dalton minimum saw a brief period of colder temperatures, and the Maunder minimum was marked by the “little ice age” where Europe and North America experienced a colder period. It should be stressed that connections between sunspot activity and global temperatures is still not clear. The Dalton cold period for example, saw the explosion of Mount Tambora, which would also contribute to cooler temperatures.

What is clear is that periods of minimal sunspot activity are notoriously difficult to predict. While the pattern of the past few cycles has similarities with the early Dalton minimum, it could also be a small fluke before a return to cycles as normal. 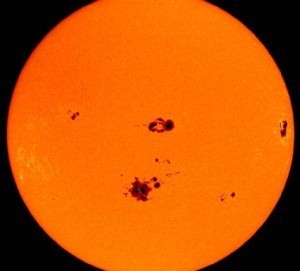 Spot the Pattern
Measuring the Sun

Snap To
Elementary
X Factor
Surface Of The Sun
End Of Days
You Could Have Died!
Border Crossing