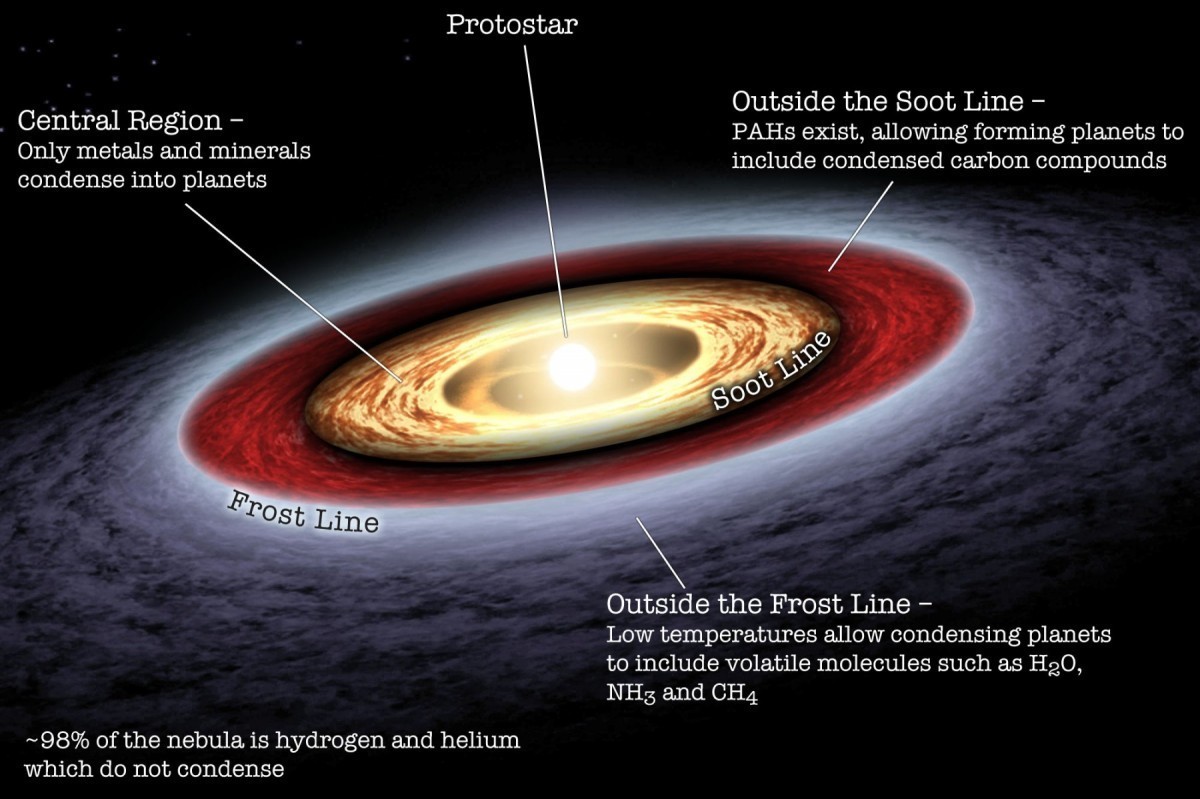 Earlier I noted that the presence of ammonia on Ceres was evidence that the dwarf planet formed further away from the Sun than it is now. The reason for that is that the material surrounding a young protostar varies significantly by distance.

A young star surrounded by a protoplanetary disc.

The basic structure of a young solar system is that of a protostar surrounded by a protoplanetary disc. As the young star begins to shine, the surrounding disk is heated. Naturally, the material closer to the star gets warmer than the material farther away. In the close region, volatiles such as water and ammonia are broken apart or pushed outward by solar wind. As a result, material in an inner solar system will tend to be more dry and rocky, while the colder outer region will be more wet and icy. Dividing these two regions is a frost line or ice line. Closer than the frost line material is too warm for ice to form. Farther than the frost line ice can form more readily.

In the current solar system, the frost line is at about 5 AU, which is a bit closer than Jupiter, so currently all the rocky planets are inside the frost line, and all the gas giants are beyond the frost line. This would seem to imply that it’s the frost line that determines whether a rocky or gas planet will form. But we now know that things are more complicated than that. For one, the frost line in the early solar system was only about 3 AU, since the gas and dust of the protoplanetary disc absorbed light, keeping outer regions cooler. For another, we know that different planets form at different rates, and they can migrate during their formation. Large, Jupiter-like planets tend to form early on, and they tend to drift inward as they form. Our solar system with its inner rocky planets and outer gas planets seems to be more the exception than the rule.

The dynamics of planetary formation are complex, and there is still much we don’t understand, but we do know that the type of material making up a body shows the history of its formation. Presence of ammonia on Ceres shows that it must have spend time beyond the ice line. In that way it seems more connected to the outer region of the solar system.

Astronomers Find New Object, Possible Super-Earth In Our Solar System
That’s No Space Station
One Ring To Bind Them
The Old Ones
Manx Comet
Snow Queen
Broken World
How Special is the Solar System?
Guardian of the Galaxy
Dance of the Moon