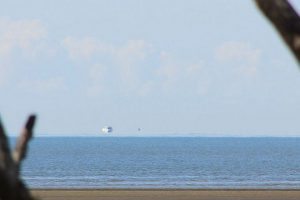 One of the most common demonstrations to support a round Earth is the fact that ships sailing away from shore appear to drop below the horizon as they are farther away. It’s an effect that’s particularly clear with tall sailing ships, but is more difficult to observe with low cargo ships and the like. It also doesn’t always work that way. When observing objects on the far horizon, it can appear that a ship actually rises above the horizon (what’s known as a Fata Morgana). We now know this is due to the refraction of light through the atmosphere, but if light can be refracted upward, who’s to say it couldn’t be refracted downward?

Since refraction is a problem on the horizon, you could measure the Sun at its highest point in the sky at two different locations on Earth. This was first documented by Eratosthenes around 240 BC. He noted that at the solstice the Sun passed directly overhead in the city of Syene, but cast a shadow on the same day in Alexandria.  By measuring the distance from Syene to Alexandria and using a bit of geometry, Eratosthenes not only demonstrated a round Earth, but he also measured its size to within a few percent. 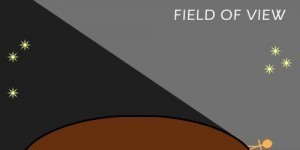 Even before Eratosthenes, Aristotle noted his evidence of the round Earth in “On the Heavens,” written in 350 BC. He noted that when traveling to Egypt that certain constellations seen from Greece could not be seen in Egypt. This was only possible if the surface of the Earth was curved. So if you take your curious scientist on a road trip, you can easily see the Earth is not flat. With a bit of careful measuring you can even get a rough estimate of its size. 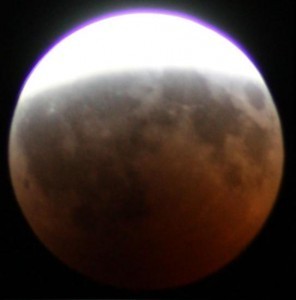 The round shadow of Earth against the Moon.

If you’re not able to travel, one other way you can see evidence of a round Earth is through a lunar eclipse. It just so happens that there’s a lunar eclipse at the end of this month. As the shadow of the Earth passes over the Moon, you’ll notice that the shadow of the Earth is circular. This is always the case, whether the Moon is near the horizon or high overhead. The Earth’s shadow is always round. Perhaps it’s just an optical illusion, but that’s very unlikely. Observations of lunar eclipses were used to argue in favor of a round Earth for centuries before the measurement of Eratosthenes.

So we’ve known that Earth is round for a very long time. What’s interesting about this question is that it shows how careful observations can lead to an amazing discovery, and how a confluence of evidence can build to support a scientific idea. From our modern perspective a round Earth is obviously true, but it was once hard-won knowledge. But even now we don’t need to rely on past authority to support long-standing scientific ideas. We can always go back and prove it for ourselves.