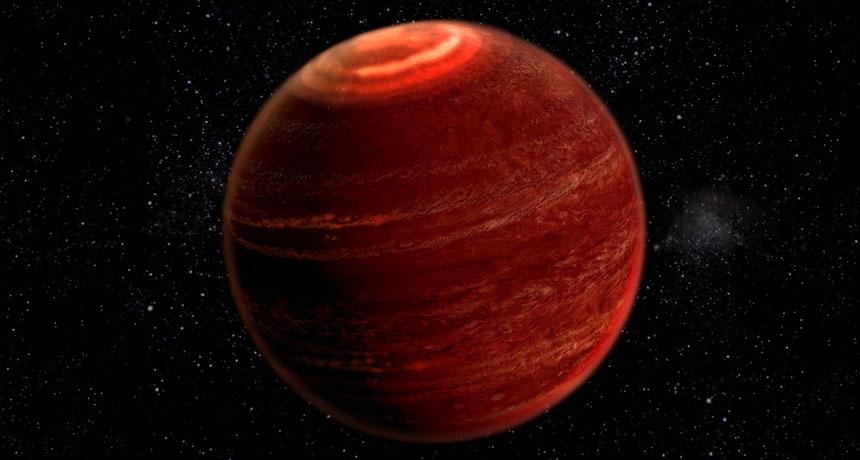 Brown dwarfs are like the Pluto of stars. While they are large enough to produce heat like a star, they are not large enough to fuse hydrogen in their cores like our Sun and other stars. They typically have a mass between 20 and 70 Jupiters, and one of the central questions has been whether they are more planet-like or star-like. New research published in Nature points to a more planetary nature by discovering bright aurora on a brown dwarf.

Aurora, commonly known as northern lights, occur when high energy charged particles strike the Earth’s upper atmosphere, causing it to glow. They occur largely at the polar regions because of an interaction between the charged particles and the Earth’s magnetic field. While they are common on Earth, they are also found on other planets like Jupiter that have a strong magnetic field. Stars, on the other hand, don’t have aurora.

We’ve known for quite a while that the surface temperatures are rather cool. The most massive brown dwarfs can have temperatures about half that of the Sun, while the smallest brown dwarfs can have surface temperatures no warmer than an oven. But whether their atmospheres are more like that of stars or planets has been an unanswered question.  In this new work, the team noticed a brown dwarf that emitted bursts of strong radio energy about once every 2.8 hours. This pulsar-like behavior could be caused by charged particles interacting with the dwarf’s strong magnetic field, or it could be due to interactions with its atmosphere. To find out the team observed the object in the visible spectrum. What they found was that the spectrum matched that of hydrogen that has been struck by charged particles. In other words, these bursts are due to very bright aurora.

This is the first case of aurora being observed on an object outside our solar system. Combined with other research that shows brown dwarfs can have clouds, it’s clear that the atmospheres of brown dwarfs are more planet-like than star-like.

Doppelganger
A Tale Of Three Cities
Did Stars Form In The Center Of Our Galaxy First?
Four of a Kind
Stellar Noise, Stellar Sounds
How To Weigh A Star
Dark Star
Shine
All Alone in the Night
Hungry Like the Wolf