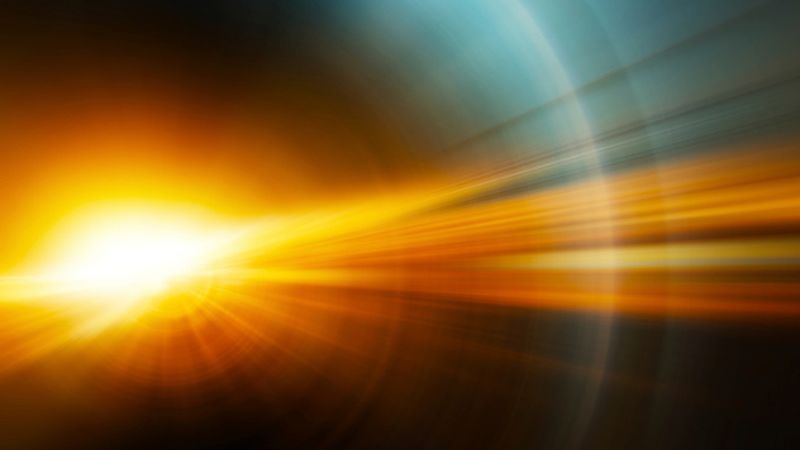 What would the universe be like if the speed of light were infinite? It might seem like a silly question, since the speed of light clearly isn’t infinite, but questions like these are a good way to explore how different aspects of a physical model are interrelated.

For example, in our universe light is an electromagnetic wave. It not only has a speed, but a wavelength. If you think of a wave as an oscillation, then at infinite speed light would have no time to oscillate. So infinite light can’t be a wave. Since the wavelength of light determines its color, that would also mean it has no color. But it gets worse because in classical physics light is produced when electromagnetic waves cause the charges in atoms and molecules to oscillate. Without waves, atoms can’t be induced to emit light, the universe would be a sea of darkness.

But real light actually has both wave and particle aspects, so let’s suppose that for infinite light it’s just some kind of particle so we can still have light and color without all that meddling wave business. What else would change?

Relativity is an obvious choice. Einstein’s theory of relativity depends upon a finite speed of light. With an infinite light speed, all those fun things like time dilation are thrown out the window. So is Einstein’s most famous equation, E = mc2. The main consequence of this equation is that matter can be transformed into energy and vice versa. It’s central to things like nuclear fusion, which powers the stars and creates the heavy elements. Stars could still be powered by gravitational contraction, but they would only last for a million years rather than billions of years. They also wouldn’t have any mechanism to explode as supernovae, so there would be no way to make new stars from old ones.

Of course this is all just a game of pretend. If you made different assumptions about physical phenomena you would derive different effects. We have no way of knowing what an infinite light speed universe would really be like. But what this shows is just how interconnected different aspects of a physical model actually are. Any tweak to the model has consequences that can ripple into widely different areas, or even cause an entire model to collapse.

Rainbow Shadows
Symmetry
And Yet It Moves
Lift You Up