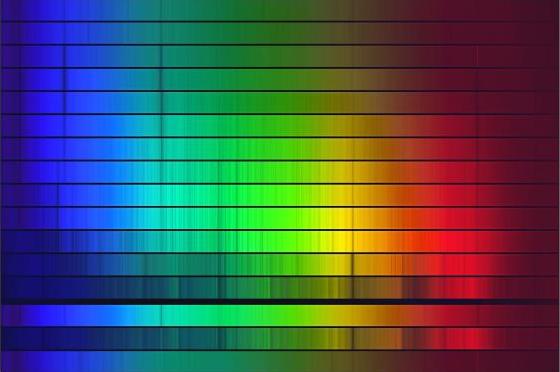 Although stars have been catalogued by their apparent brightness for centuries, cataloging stars by their color didn’t begin until the early 1900s. Much of this is due to the fact that when we look at stars with the naked eye, most of them appear white. There are a few that appear reddish, such as Betelgeuse, and some that appear slightly blue, such as Regulus. Although stars do vary in color, our eyes aren’t sensitive enough to distinguish it.

In order to determine the colors of stars, astronomers would measure their spectra. This was a difficult measurement to do, but even worse was trying to develop a categorization scheme. Several variations were proposed, but the one we use today was developed by Annie Jump Cannon. Cannon was an astronomer who worked with a team of women astronomers under Edward Pickering. At the time women were not generally considered astronomers in their own right, so they generally did the labor intensive measurements for a male astronomer. Pickering’s team was known as the Harvard Computers, or mockingly “Pickering’s Harem.”

Most catalog systems at the time focused on different absorption lines in a stellar spectrum. Make a list of different ones, and you get category A, B, C, etc. The problem with this was that line spectra can appear in a star’s light for various reasons, which makes it hard to pull out patterns. It would be like categorizing people by their first names and then trying to determine their family relationships.

Cannon’s brilliant stroke was to focus on only one type of line spectra, known as the Balmer series. This had the advantage of being relatively easy to measure, and was also known to be affected by temperature. Cannon adapted earlier catalogue schemes, which is why her system had the seemingly odd categories O,B, A, F, G, K, M. This system turned out to be extremely effective. Not only is the categorization much more clear than earlier systems, it separates stars by their temperature and color. Combined with a star’s absolute brightness, it led to the Hertzsprung-Russell diagram, from which we came to understand the evolution of stars.

In her lifetime, Cannon became extremely good at cataloging stars in her system. She could catalog a star by its spectra in under a minute, and eventually cataloged more than 500,000 stars. Cannon’s system has been revised slightly over the years, but remains centrally hers. It is now known as the Harvard classification scheme.