Recently there was an article by Tim Reyes asking if the standard cosmological model is a Rube Goldberg machine. The idea is that so many ill-fitting ideas have been put together that it seems unreasonably complex.  I’ve used a similar criticism against certain models through the phrase “tweak theories are weak theories.” Given the latest implications that the Higgs field may contradict inflation, and the BICEP2 results may not hold up, should we really think of standard cosmology more as a tweak theory than a robust model?

The current standard model of cosmology, often called the LCDM model, is basically as follows. About 13.8 billion years ago the observable universe was hot and dense. Then, driven by gravity, dark energy (L for lambda, which is the symbol for dark energy in general relativity) and cold dark matter (CDM) it expanded while galaxies and clusters formed, leading to the universe we see today. Since dark matter is a mysterious material we haven’t seen directly, and dark energy is even less understood, it is tempting to see them as “tweaks” just to make a model work. This urge is particularly strong given that these things aren’t only necessary for the LCDM model, they supposedly make up 23% and 73% of the known universe. Regular matter like planets and us are less than 4% of the universe. A model where 96% of it is hypothetical “stuff” hardly seems very scientific.

But taken from an observational approach, however, the LCDM model seems strikingly robust. There are three main observational tests for the model, which are sometimes referred to as the pillars of the big bang. These tests agree with LCDM to a degree that is almost unparalleled. 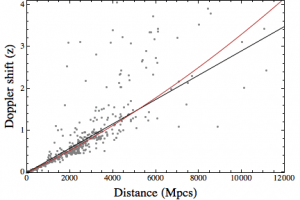 The first pillar is the redshift-distance relation. This relation was first demonstrated by Edwin Hubble, using the Cepheid variable period-magnitude relation discovered by Henrietta Leavitt.  By using Leavitt’s relation, Hubble could determine the distance to dozens of galaxies. He then observed their Doppler redshifts to determine how fast these galaxies move away from us. What he found was a linear relation between galactic distance and the speed at which the galaxies move from us.  It was the first evidence that the universe was indeed expanding.

Since Hubble’s first discovery of this relation in the late 1920s, we’ve made ever more detailed observations of the effect. Using the brightness of distant supernovae we can determine the distance of galaxies billion of light years away. From this we found the universe is not only expanding, but that space itself is expanding. Our observational data is now precise enough that we can distinguish between a universe where galaxies are moving through space (like an explosion from a point) and a universe where space itself expands over time.  The observations clearly match cosmic expansion. While this concept might seem quite odd, it is easily describable within general relativity, which has been verified experimentally countless times. 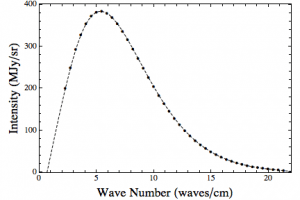 The second pillar is the cosmic microwave background (CMB). Often the expanding universe is imagined as a loaf of rising raisin bread. But just because the raisins are expanding away from each other like galaxies, it would be silly to claim the bread began as a primordial dense state. So why do we assume this for the universe? Because the CMB tells us this.  If the universe did begin hot and dense, then there should be an afterglow of that original heat.   If space is really expanding, rather than matter exploded from a point, then the afterglow should be seen in all directions.  Not only that, the afterglow should appear thermal. In other words, its spectrum should match that of a blackbody. What we find is exactly that. The thermal glow has cooled so that it is now seen in microwaves (hence the term), and it is seen in all directions. Not only does the CMB appear thermal, but it is so close to a perfect blackbody that it is one of the best experimental fits humanity has ever done.

Looking at some of the most distant quasars, we have found two examples where they illuminate primordial gas clouds. We can tell that they are primordial because they don’t contain any trace of heavier elements. When we compare the ratio of hydrogen to deuterium, we find that it agrees perfectly with the prediction of elemental abundance.  Other observations of slightly less pristine clouds find similar agreement for the ratios of helium and lithium.  This is perhaps the most difficult pillar to verify, but all evidence so far agrees with the predictions of LCDM.

Various observations of the state of our universe. The yellow triangle agrees with all of them.

Sometimes a fourth pillar, known as Olber’s paradox, is listed as well, but the big three are the ones that really put LCDM specifically to the test. Beyond that there are other tests such as the baryon acoustic oscillation (BAO) that looks at the distribution of galaxies in the universe as a measure of dark energy, or the Alcock-Paczynski cosmological test, which compares the LCDM model to other possible big bang models. All of these make specific predictions about the big bang, dark energy, dark matter and the age of the universe.  They agree to remarkable accuracy.

This doesn’t mean there still aren’t questions about many of the details. There are some big mysteries, such as early inflation and how the Higgs field comes into play. With new observational data being gathered, there will be a lot of arguments about the details and difficulties. But all of these arguments are not about the LCDM model as a whole. Even if we discover a radical new understanding of the universe, the LCDM model will continue to work amazingly well.

Even with its challenges, the LCDM model is not a “tweak theory”. It is a robust model of the universe supported by a great deal of astronomical data.

Are We Living In A Black Hole?
Evidence Of Absence
Emergence Of Gravity
Primordial Black Holes Could Solve Dark Matter Mystery
Echo of the Big Bang
Galactic Pile Up
Is There Anybody Out There?
Black Swan
That’s a Big Twinkie