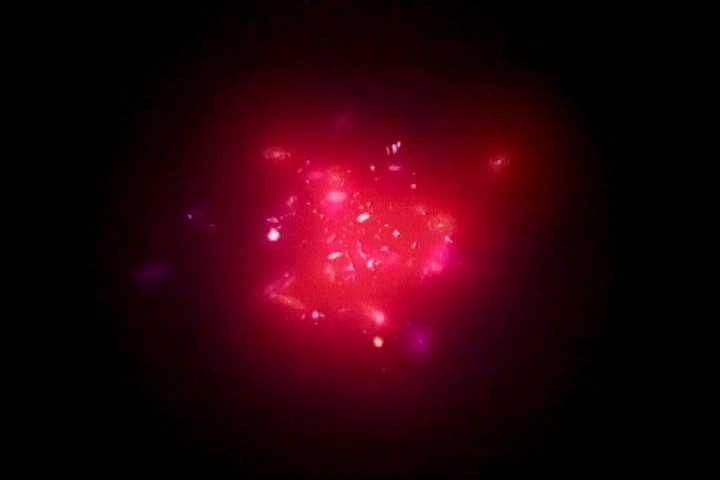 In the ongoing search for dark matter particles, the most popular are efforts to detect them directly here on Earth.  These experiments involve underground detectors that try to observe the impacts between dark matter and regular matter.  While there have been some interesting hints, the efforts so far have turned up nothing, and have even eliminated many of the low-mass options for dark matter WIMPs (Weakly Interacting Massive Particles).  Another way to look for dark matter particles is to look for the by-product of their collisions with each other.  A recent paper posted on the arxiv has done just that, and they think they’ve found a signal.

The paper hasn’t yet been peer reviewed, so the results should be considered tentative, but they are interesting.  What the team did was analyze data from the Fermi gamma ray telescope, specifically gamma rays emitted in the region of the supermassive black hole in the center of our galaxy.  Assuming dark matter particles exist, they must interact with things gravitationally, and that means near the black hole in the center of our galaxy they would be orbiting rather quickly.  Because of this they would also tend to collide at high speed, causing them to either emit gamma rays directly, or decay into particles that would then emit gamma rays.

The challenge is that there are several sources of gamma rays in the region of the black hole, such as rapidly rotating neutron stars known as millisecond pulsars.  The team eliminated the expected sources of gamma rays, and found that there was a signal that still remained.  You can see this in the image below (taken from their paper) where the left image is the raw gamma ray signal, and the right image is the “extra” signal remaining when the expected sources are removed.

There are a few things that are interesting about this result.  The first is that the strength of the signal follows the expected profile for the distribution of dark matter near galactic center.  The second is that the strength and wavelength of the signal matches matches the predictions for dark matter WIMPs with a mass of 35 GeV, or about 35 times more massive than a proton.  So the results look a bit promising.

But we can’t declare victory quite yet.  As I mentioned, the paper hasn’t gone through peer review.  But even assuming it does, the statistical strength of the signal is only at 3 – 4 sigma, meaning that it has a 1 in 100,000 chance of being a fluke.  That might seem pretty certain, but we have seen direct detections of dark matter particles with at a similar statistical strength fade away upon further investigation.  It is still possible that this result will also fade away under further investigation.  To really be sure of the result we’d like to see a 5-sigma outcome, which would be less than a one in a million chance of being a fluke.

What is clear is that we are starting to get various hints of dark matter from different sources.  So hopefully soon we will either have a conclusive dark matter discovery, or clear evidence that we need to look elsewhere.

It’s What’s For Dinner
A Difficulty with Dwarfs