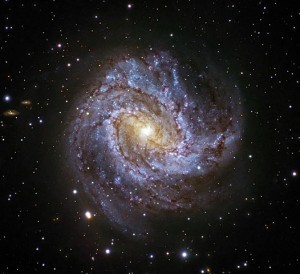 This same limit is often thought to hold for other objects, such as active galactic nuclei (AGNs) powered by black holes, but it also isn’t an absolute limit.  When Eddington derived the limit he assumed a star that is spherical and non-rotating.  Black holes are known to rotate, and their accretion disks are not spherical, so there have been proposed models that allow AGNs and other black holes to emit more power than the Eddington limit.  There have been searches for such super-Eddington luminosity, but so far results have been inconclusive.

Now a new paper in Science has analyzed the energy output of a black hole in the galaxy M83, and found that it has emitted sustained levels of energy beyond the Eddington limit.  Since the black hole was in a quiet phase when it was observed, the team could make an accurate determination of its mass by analyzing its accretion disk.  They then looked at the effect of its jets, which were produced in an active period.  They found that the energy of the jets clearly exceeded the Eddington limit.

By demonstrating that energy generated near black holes can exceed the Eddington limit, the authors have demonstrated that black holes can affect their environment in a more powerful way that originally thought.

Gravity Check
Yes, Virginia, There Are Black Holes
Edge Effect
Out of the Blue
A More Perfect Union
Non-Singular Black Holes
Hype It Up
A Million Star Sky
Young and Brilliant
Free Willy