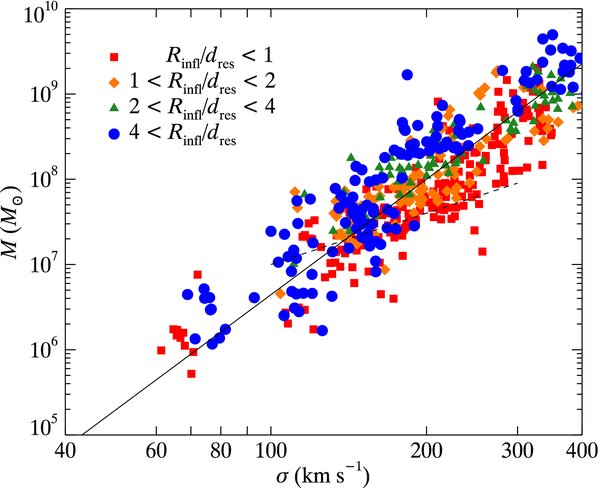 One of the more interesting modern findings about galaxies is that most of them have black holes in their centers.  We can’t observe these black holes directly, but we can see their effects through things such as high-energy jets streaming away from them.  In many cases, we can even get a measurement of their mass by observing the distribution of the speed of stars in a galaxy.  I wrote about one such method about a year ago.

We’ve done this for quite a few spiral and elliptical galaxies, and it turns out there is a relationship between the distribution of stellar speeds in a galaxy and the mass of the central black hole.  You can see this relation in the figure below from an article in the Astrophysical Journal.  Here the mass of the central black hole is plotted versus (a statistical measurement of ) the range of speeds.

Much of astronomy focuses on nailing down relationships like this one.  We use the data we have to determine these relationships, then use those relationships to quantify things like black hole mass even when we can’t make a precise measurement.  This means that even with a small amount of data we can determine quite a bit about a galaxy.

Coin Toss
The Lion, The Witch And The Wardrobe
Snow White, Rose Red
The Old Model Doesn’t Work
Spherical Cow
How To Build A Black Hole
What Makes a Podcast/More About Pluto
Order Of Magnitude
Mystery Of The Largest Stars
Anomalous Anomalies