In an earlier post I wrote about how Einstein argued that gravity is not a force but rather a curvature of space and time. As beautiful as this idea is, how do we know that space is really curved? We can can answer that question by another one: how could we tell if space is flat?

In our everyday world we could demonstrate that a table is flat (or level) by rolling a smooth marble across its surface. If the table is perfectly flat, then a marble will always roll in a straight line. If the table is warped a bit, then we would see the marble change direction due to the warping of the surface.

We can use a similar trick to determine is space is flat. You might remember that Newton said gravity was a force between two masses. In classical physics light doesn’t have any mass, so according to Newton gravity cannot change the speed or direction of light. In Newton’s universe, if you shine a beam of light in any direction, it will travel in a straight line. Of course in Newton’s universe, space is flat. 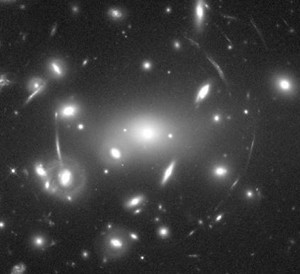 This effect was first observed by Eddington in 1919, when he observed the deflection of star light due to the Sun during a total eclipse. But the effect is more dramatic when seen on the galactic scale. The image here is such an example. It is a Hubble image of a cluster of galaxies. You can see a pattern of thin arcs around the central galaxy. Those arcs are formed by the light of galaxies behind the central one. As their light heads our way, it is bent by the central mass, which smears their image out into thin arcs. 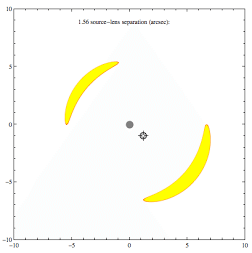 In the second figure I’ve plotted a simple model of this effect. The small gray circle is a distant disk of light, the cross mark is the location of a closer galaxy-sized mass, and the yellow arcs represent the image of the distant disk, warped and bent by the gravitational curvature of the galaxy. The gravitational lensing we see in galactic clusters is just as Einstein’s theory predicts.

Space and time are really curved.

If you’d like to play around with gravitational lensing yourself, check out this demonstration created in Mathematica. It is what I used to create the gravitational lens figure in my previous post. It requires a plugin, but it’s a cool demo.